Over the next several days, a series of tropical waves will cross the Atlantic Basin. Associated moisture will provide increased rain coverage at times for the Baton Rouge area.

The Next 24 Hours: Overnight, leftover showers and thunderstorms will ease and give way to some breaks in the clouds. Sky gazers may look northwest just after dusk to catch a glimpse of Comet Neowise just beneath the Big Dipper. Look for a consistent-with-the-times low temperature in the mid 70s. On Tuesday, morning sunshine will push high temperatures into the low 90s. Instability, seen in some vertical cloud development, will lead to an isolated crop of showers and thunderstorms—expect about 30 percent coverage across the 13 Parish, 3 County forecast area.

The Long Term Trend: Wednesday through Friday appear to be the most active in the 7-Day Forecast with regard to showers and thunderstorms. Tropical moisture (see below) associated with a low pressure system crossing the Gulf of Mexico will bump up the number of showers and thunderstorms that are able to develop—especially Thursday. Scattered to perhaps widespread coverage is expected all three days before the low exits the region and precipitation reverts to more typical, isolated coverage over the weekend. Look for 7-Day rainfall totals of 1 – 3 inches with the highest amounts closer to the coast. Average temperatures for the period include highs in the low 90s and lows in the mid 70s. Through this workweek, readings will be near or below normal before extending above normal next week. The Climate Prediction Center shows a good chance of above average temperatures persisting in the 8 – 14 day range. 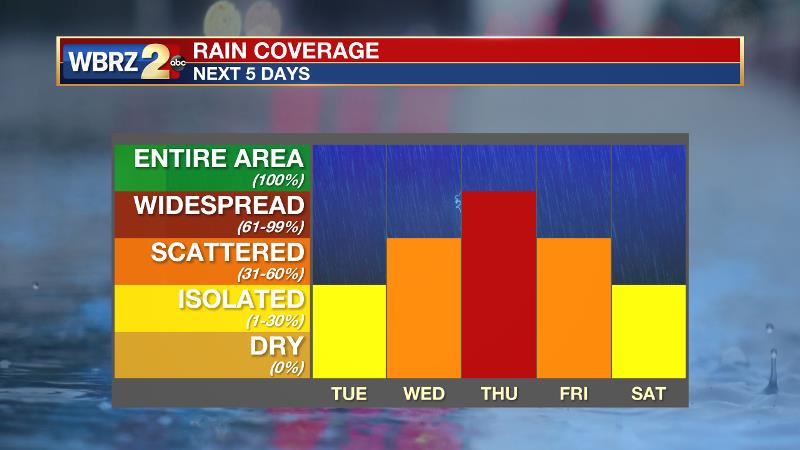 The Tropics: Responsible for showers and thunderstorms on Monday, a weak low pressure system over the northwestern Gulf of Mexico will drift into Texas by Tuesday before any substantial development can occur. Disorganized showers and thunderstorms near the Bahamas will move west-northwestward through the Straits of Florida and over the southeastern Gulf of Mexico by Tuesday. By then, environmental conditions could become a little more conducive for development of the system and the National Hurricane Center puts a formation chance at 20 percent. The current forecast is for this system to cross the central Gulf of Mexico, reaching Texas by the end of the week. Shower activity associated with a tropical wave located about 1000 miles west-southwest of the Cabo Verde Islands has changed little in organization during the past several hours. Though there may be a window of opportunity for development as this system moves west-northwestward over the next few days, environmental conditions are forecast to become unfavorable for tropical cyclone formation by the end of the week.

The Explanation: The primary feature of interest to the forecast over the next week will be a tropical wave moving west into and across the Gulf of Mexico Tuesday through Friday. There is no major concern for substantial development out of this system and the greatest impacts from it will be over coastal and offshore areas. As atmospheric moisture gradually increases Tuesday through Thursday, measurable rain coverage will tick up from isolated to scattered to widespread. Still, since the low will be well south of the area, it will take daytime warming and marine breezes to kick out showers and thunderstorms so most of the activity will occur around and after midday. Especially Thursday, the added cloud cover and precipitation in the area may hold down high temperatures. No major changes to dew point temperatures in the low to mid 70s will keep low temperatures in that range. By Friday the tropical system will push away to the southwest and a ridge in the mid-levels of the atmosphere will lead to some drier and more stable air. Just isolated showers and thunderstorms will form Saturday into early next week along marine breezes after slightly above average high temperatures.