A warm front, cold front combination is creating showers and thunderstorms to start the week. Humidity will be elevated until the next cold front passes through early Wednesday.

Today and Tonight: On Tuesday, another cold front will approach the area. At first, a peek of sunshine amidst mostly cloudy skies will help highs into the low-to-mid 80s. A few showers and thunderstorms may develop in the humid air mass, especially closer to the warm front north of I-10. The cold front will be responsible for more rain and thunderstorms, perhaps in a broken line overnight. Any storms through Wednesday morning could produce downpours.

Up Next: With temperatures near 70, the cold front should push through Wednesday morning. The passage will lead to drying conditions and high temperatures in the low-to-mid 70s Wednesday through Friday. Thursday and Friday will begin in the upper 50s with some sunshine to follow. Signs point to unsettled weather for the weekend prior to an even stronger cold front early next week.

The Tropics: Tropical Depression 15 has formed near the Cabo Verde Islands and has a brief window to strengthen into Tropical Storm Nestor on Tuesday. The system will quickly diminish by Thursday in the eastern Atlantic. A second disturbance will meet its demise near the Windward Island over the next two days. 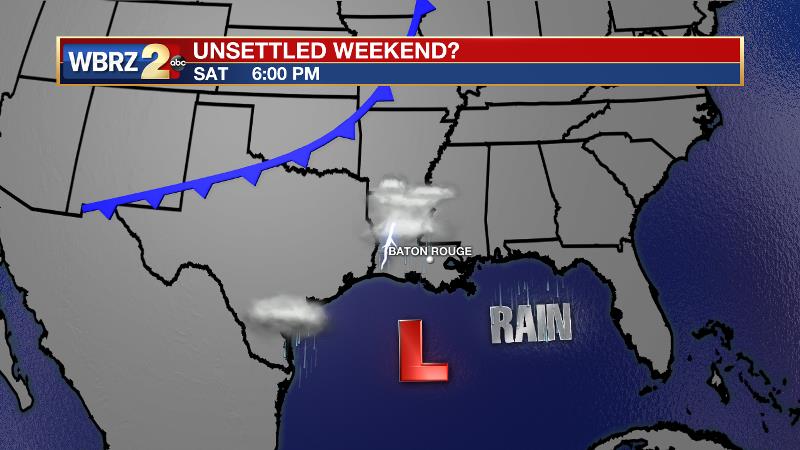 Closer to home, a third system over Central America will end up in the southwestern Gulf by the end of this week. While the development potential is low at 30 percent, this system will spread added moisture across the central Gulf Coast to enhance the possibility of showers and thunderstorms. Some areas of heavy rainfall could develop over the weekend. By early next week, the mess will be swept away by another cold front.

Showers and thunderstorms will focus closer to a warm front that will set up across the I-20 corridor on Tuesday. The local area will sit in a southerly flow keeping ample moisture and humidity in place. Widespread forcing is lacking, but closer to the warm front, areas north of I-10 may see a few showers and thunderstorms. The next cold front will drop into the region tonight. Ingredients for severe weather will stay north of the local area but some rain and thunderstorms could bring downpours and cause the wind to pick up as the boundary crosses early Wednesday. Drying conditions are expected through Wednesday as a surface high builds across the Mid-Mississippi River Valley.  A tropical disturbance is expected to move into the western Gulf of Mexico by the end of this week. While strong westerlies will make tropical development difficult, those steering winds will steer this disturbance and its moisture toward the central or eastern Gulf Coast. Initially, dry air will make it difficult for rain to develop, but as the system moves closer to land, a plume of moisture should push inland with the possibility of heavy rainfall and strong thunderstorms. It is still too early to pinpoint exactly where this may occur, so stay in touch. By Tuesday, a strong cold front will blow through and end the unsettled weather.