A round of rain is with us to begin the new week. A couple of cold fronts will reinforce the chill and maintain below average temperatures through the weekend.

Next 24 Hours: A patch of rain will move across the area tonight. Expect off and on light to moderate showers through daybreak. South winds of 5-10mph will cause low temperatures to stop in the mid 40s, so there is no threat for frozen precipitation. On Tuesday, some rain may linger through the mid-morning hours, but should wrap up by lunchtime. Clouds will stick around and therefore high temperatures will not escape the mid 50s. A cold front will swing through during the late afternoon hours.

Up Next: Behind a cold front, winds will become northerly on Tuesday night and so low temperatures will go lower, down to the mid 30s. Wednesday will be filled with sunshine but the chilly north breeze will keep high temperatures in the mid 50s. A freeze is possible on Thursday morning and then after continued dry time, the next cold front will arrive on Friday. Expect showers to end the week and even colder temperatures into the weekend. While numbers will not be quite as low as last weekend, another hard freeze could occur Saturday morning. CLICK HERE for your detailed 7-Day Forecast. 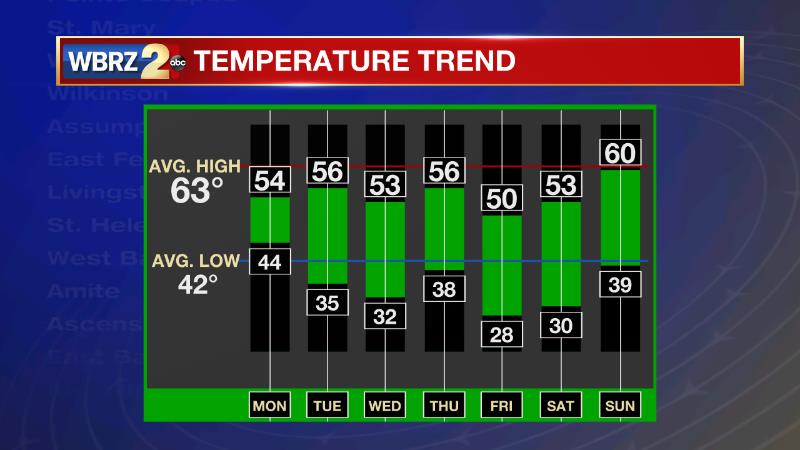 The Explanation: A broad upper level trough encompassing the Eastern U.S. will send an upper level low across the Gulf Coast tonight and tomorrow. A wide swath of rain has developed out ahead of the upper low and will be enhanced by a deepening low pressure system in the western Gulf of Mexico. The rain shield will continue to move across the area through the night. Since the surface low will be weakening and staying south of the coast, the threat for severe weather is non-existent. However, a healthy soak is expected and rain amounts around one inch will be possible, especially near the coast. Beyond the surface low, a cold front will sweep through the area on Tuesday afternoon. The boundary will not arrive quick enough to prevent high temperatures from reaching the mid 50s but it will tap lingering moisture and maintain a cloud deck for most of the day. Cooler air will spill in for Wednesday and in fact, cooler than average temperatures are poised to stick around for the rest of the month. Expect highs generally in the mid 50s with lows in the 30s. Another weak cold front later this week will bring a few showers Friday and another punch down in temperatures for the weekend. A hard freeze will be possible on Saturday morning.