In the southern hemisphere, there has been a slow migration poleward of the jet stream since 1960. In fact, the summertime jet stream has shifted about 2° south by the end of the twentieth century. This was all related to a hole in the ozone layer located over Antarctica that was discovered in the mid-1980s which prompted international steps to help curb this dangerous issue. That is why on September 16th 1987 the Montreal Protocol was signed, stopping all production of Ozone-Depleting Substances (ODS) by January 1st of 1989. Since then, ODS’s atmospheric concentrations have been decreasing, and we are finally beginning to see atmospheric results directly related to this important global step to protect intricate weather and climate systems.

Stratospheric ozone absorbs harmful ultraviolet solar radiation and that energy heats the stratosphere, which is Earth’s second lowest layer. This is why temperature begins to increase with height in this layer, versus here in the troposphere where it cools with height. Due to the lack of regulations on ODS’s before 1989, these chemicals were able to eat away at the ozone near the Antarctic, which allowed the stratosphere to cool by 7°C between the late 1960s and the late 1990s. This cooling increased the north-south temperature gradient between the South Pole and the mid-latitudes, strengthening westerly winds in the stratosphere and shifting the jet stream in the lowest level in the atmosphere toward the South Pole. It is currently not understood why westerly winds in the second-lowest layer of the atmosphere affect the jet stream in the lowest layer of the atmosphere, but it has been found that they are related and do have an impact.

The jet stream is band of strong winds that circle the globe. There are actually four that are present, two polar jet stream and two subtropical jet streams. The winds are from west to east, and their locations do vary depending on season and locations of pressure. They also do a very good job of separating warmer and cooler air, which is the main concern when their average yearly location shifts either north or south. In the case of the Southern Hemisphere’s polar jet shifting more south even by just 2°, about 140 miles, it changed the transportation of atmospheric heat and moisture in the underlying area. This resulted in warming of the Antarctic Peninsula, Patagonia, and New Zealand, and also the drying of Western Tasmania and Western New Zealand. It even altered the circulation, temperature, and salinity of the Antarctic Ocean. 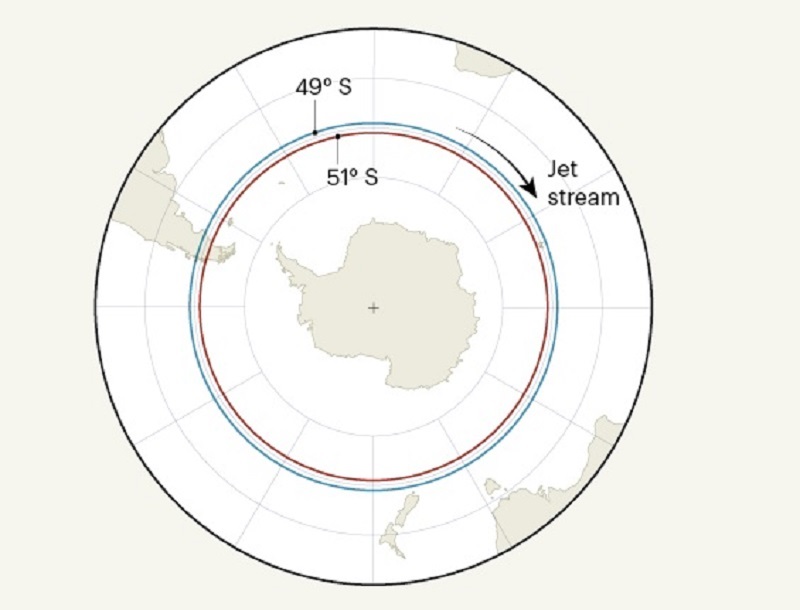 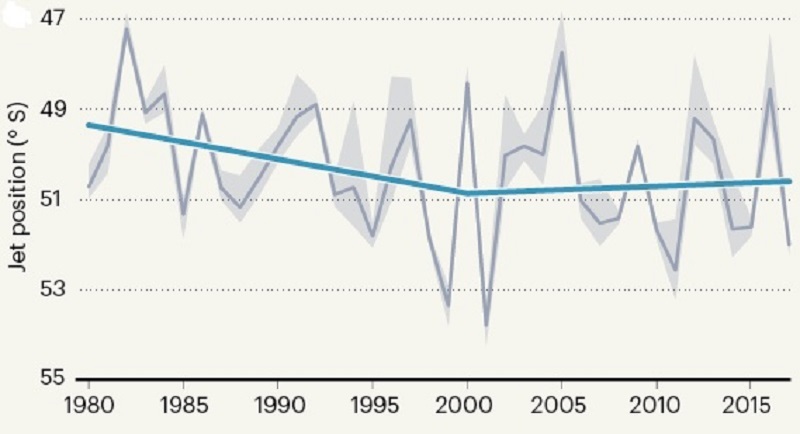 Between 1980 and 2000, the polar jet stream has shifted south from 49° to 51° latitude, but has now begun to level off and actually slowly recover after the year 2000. This allows scientists to understand more of the intricacies of the interaction between atmospheric layers, and also in determining response speed of ozone recovery. There is little understanding on the topic of stratospheric-tropospheric interaction, and the role that it plays in our climate, but research findings like this highlight the fact that they are there. It also sheds light on the impacts that humans have on the environment, and how policy changes can have a slow but definitive effect on reversing damaging changes done to atmospheric systems.