A dry, reinforcing cold front will bring even cooler temperatures to the region through Tuesday. A light freeze is possible.

Today and Tonight: On Monday, high temperatures will only make it to around 57 degrees despite ample sunshine. With continued clear skies, overnight low temperatures will drop to near freezing along and north of I-12. While the duration and extent of the 32 degree readings is questionable, those living north of I-10 may want to take freeze precautions, just in case.

Up Next: A surface high pressure system will move overhead on Tuesday maintaining clear skies and seasonably cool temperatures. As this high scoots to the northeast on Wednesday, a gradual change in wind direction to the east and eventually southeast will allow temperatures to moderate through the remainder of the workweek. Highs will break back into the 70s by Friday. At that time, a ragged cold front will approach the area and create isolated to scattered showers and storms. Another one will come by on Sunday. 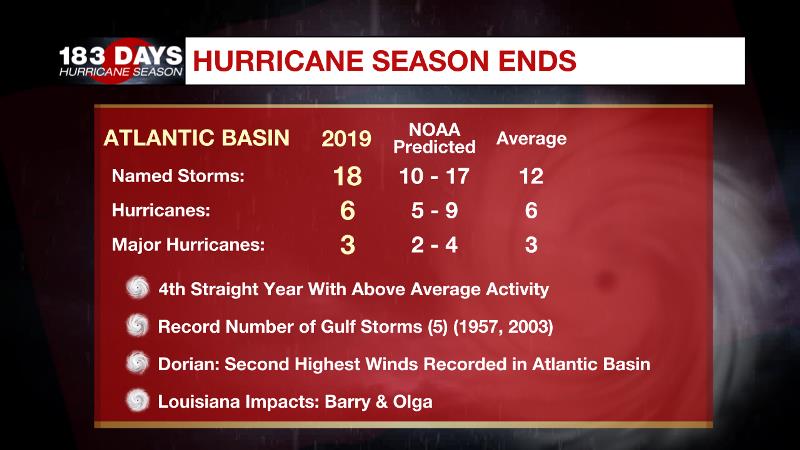 The Tropics: The 2019 Hurricane Season has concluded after a fourth straight of above average activity. Louisiana experienced impacts from Hurricane Barry and Tropical Storm Olga. Hurricane Dorian was the signature storm of the season, registering the second highest wind speeds in Atlantic Basin history.

Quiet weather will prevail through the middle of the week. A nondescript front moved through the region reinforcing the northwest flow at the surface to go with the remainder of the atmosphere. The result will be below average temperatures through Tuesday. Light northwest winds will prevent considerable warming on Monday despite full sunshine. Monday night into Tuesday, light winds and clear skies will mean optimal radiational cooling conditions and a light freeze will be possible along and north of I-12. Forecast model guidance has come in a little bit warmer than previously so 32 degrees may be questionable in Baton Rouge, but it would not be a bad idea to take freeze precautions as far south as I-10, just in case. A gradual return to onshore flow on Wednesday and Thursday will allow temperatures to moderate and prime the atmosphere for clouds and showers by the end of the week. An upper level trough will move across the central Gulf Coast. While instability will be limited, there could be just enough wind shear for a thunderstorm or two—perhaps strong. Expect a brief break on Saturday with another chance for rain on Sunday.