FREEZE WARNING along and north of I-10 Tuesday night

A FREEZE WARNING is in effect from 1am - 9am Wednesday.  Temperatures of 30-32 degrees are possible along and north of I-10/12 including Ascension, East Baton Rouge, East Feliciana, Iberville, Livingston, Pointe Coupee, St. Helena, Tangipahoa, West Baton Rouge and West Feliciana Parishes as well as Amite, Pike and Wilkinson Counties.

Frost and freeze conditions could kill crops and other sensitive vegetation. Take steps now to protect tender plants from the cold. Also, consider bringing your pets indoors or provide adequate shelter from the cold. Be sure those that have insufficient heating know of warming shelters.

Next 24 Hours: Clear skies, low dew points and north winds—almost all of the ingredients are in place for an unseasonably cool night across the Capital Area. The caveat is in those north winds; just how light will they be? Any breeze over about 5mph will keep the near surface air mixed with the lower atmosphere preventing temperatures from bottoming out at or below freezing. Areas farther north and east of Baton Rouge have the best chance of lighter winds and colder temperatures. Even with city low temperatures expected to be around 35 degrees, it would be a good idea to take freeze precautions. Wednesday will be unseasonably cool once again with high temperatures in the mid 60s despite ample sunshine. 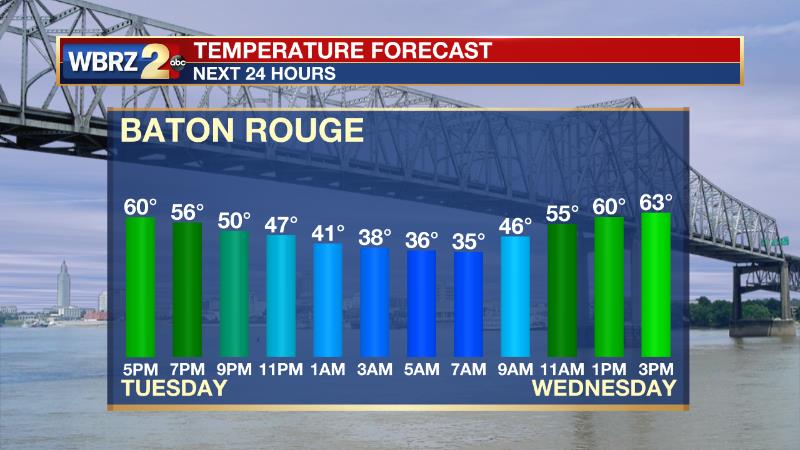 Up Next: After another start in the 30s, thermometers will make it back into the low 70s Thursday afternoon and continue moderating each day forward. After one more chilly morning in the mid 40s, sunny skies will return high temperatures to average near 80 on Friday. Football weather is looking rather nice for LSU and Southern, both with home games this weekend. Saturday will start in the mid 50s and warm into the low 80s beneath sunny skies. Moisture will slowly collect in the atmosphere on Sunday and Monday, revealing a few clouds and slightly above average temperatures. The next front will arrive early next week perhaps delivering a chance for showers and thunderstorms. CLICK HERE for your detailed 7-Day Forecast.

The Tropics: All is quiet in the North Atlantic, Caribbean Sea and Gulf of Mexico. No tropical development is expected during the next 5 days.

The Explanation: Chilly air will continue to advance in tonight and as winds calm down a bit, in typical fashion for our area, the second night after a front will be coldest. Lows on Wednesday morning will be approaching freezing in several locations, especially along and north of the I-10/I-12 corridor. Ideal radiational cooling conditions with dry air, clear skies and lighter winds make this plausible. If the winds should remain elevated, low temperatures will come in a few degrees above the forecast and stay in the upper 30s. Similar conditions are anticipated into Thursday morning but temperatures should check in a degree or two warmer than the previous night as a cool air mass this time of year is fleeting. Sinking air will dominate the atmosphere Thursday through Sunday, leading to mainly clear skies. A broad surface high pressure system will settle over the Eastern U.S. this weekend and onshore flow/southeast winds will add just enough moisture to the low levels for some morning fog to form this weekend. Additionally, the moistening and warming associated with the onshore flow will help to restore temperatures to seasonable levels. Another cold front will push into the area around Tuesday of next week. It is a little early for fine details but there appears to be a reasonable chance for some showers and thunderstorms with that system.