Crisp conditions will continue before some temperature moderation on Friday afternoon. The next chance for showers and thunderstorms will be during the middle of the weekend.

Today and Tonight: Thursday will be another afternoon with high temperatures in the low 60s. Satellite observations clearly show a mid to high level cloud deck, cirrus clouds, moving from northwest to southeast through Texas and Louisiana. For that reason, we can expect some clouds to obstruct a full blue sky today, but plenty of sun will still be seen. Winds will remain northerly at 5-10mph, before getting lighter overnight. While low 40s are expected for low temperatures, Friday morning could be another one with some pockets in the upper 30s and light frost.

Up Next: Temperatures will begin to warm on Friday as winds shift. Highs could scare 70 degrees. Warmth and moisture will return in advance of the next storm system pegged for the area on Saturday. While alarms are not sounding, the setup is at least worthy of monitoring for some strong thunderstorms. The best chance for severe weather will be in north Louisiana where some gusty wind and hail will be possible. Clearing will occur on Sunday with more sunshine and below average temperatures to follow early next week. 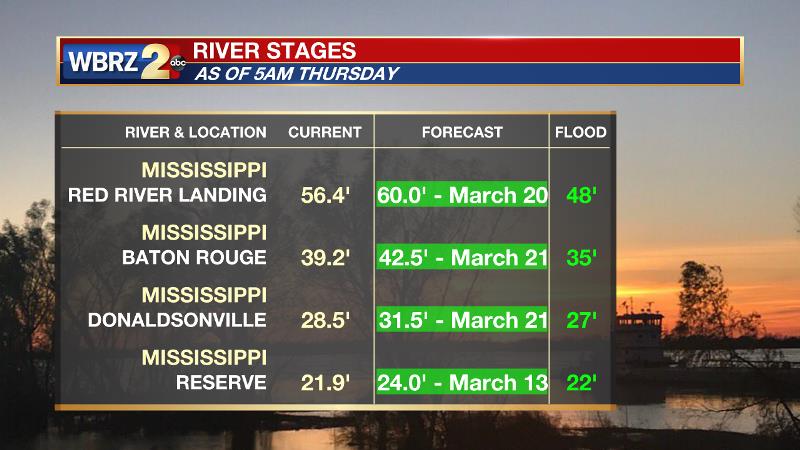 The Mississippi River will continue a slow rise over the next two weeks. For the local area, from Red River Landing to Baton Rouge to Donaldsonville, the crest will occur around March 20. Given the current forecast, impact outside of the levees is expected to be minimal with the exception of soppy land around the Angola farms and by the LSU veterinary complex. The city of Baton Rouge is protected by levees up to at least 43 feet. On the river, traffic and industrial operations will be restricted. In New Orleans, the Army Corps of Engineers will open the Bonnet Carré Spillway on Thursday to prevent unnecessary pressure from being exerted on levees in the Crescent City. 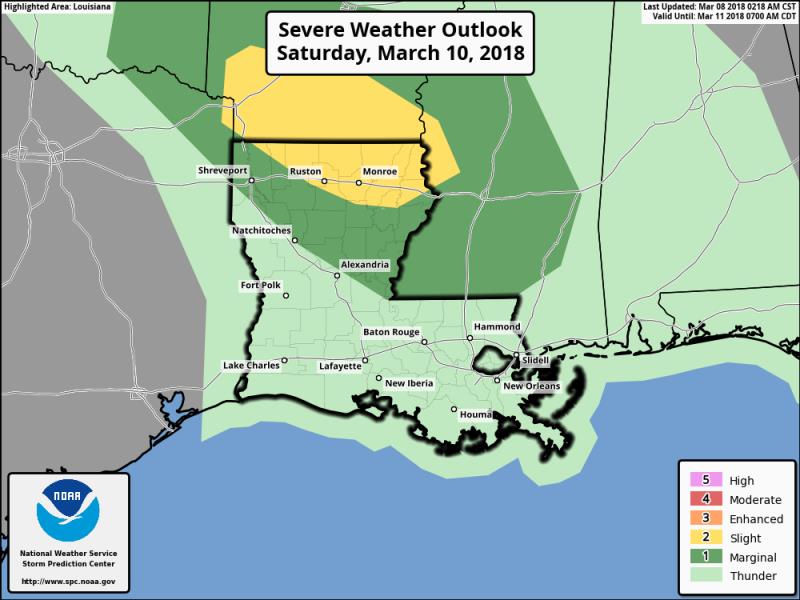 Thanks to an anomalous, deep mid-level trough for early March, below average temperatures are expected to round out the week. An area of high pressure at the surface will move from the local area to the Southeast Coast through Friday. By this time, as a trough exits the East Coast, thermometers will begin to moderate somewhat closer to average. The next shortwave trough will quickly dig into the nation’s heartland. Strength of the trough is questionable but the tilt looks neutral to positive, which is one limiting factor to storm strength this time of year. Forecast models have backed off the instability pegged for the Saturday/Sunday timeframe, which would also limit storm severity. What actually occurs will most likely depend on if and where a surface low pressure system develops and moves. Typically, a modest surface low moving through central Louisiana creates wind profiles favorable for severe weather. What may actually occur is a scenario that is typical of cool season severe weather events. Early showers and thunderstorms along the Gulf Coast may cut off the moisture feed and cool the atmosphere limiting high instability by the time the best dynamics for strong storms arrive. The National Weather Service Storm Prediction Center notes this possibility and highlights the best chance for severe weather in north Louisiana where a 2 out of 5 "slight risk" has been issued. However, this is still early since the storm system has not developed and the risk area could be shifted south. Given the uncertainty, at this time, the forecast will maintain showers and thunderstorms for Saturday but we will need to continue to monitor for any changes that might signal higher impact weather. A front will sweep through the area as the stormy weather exits and temperatures will once again be 5-8 degrees below average with quiet conditions through the middle of next week.