Back to July steam with a few pop ups

A weather pattern quieter and more typical of July will be restored for the remainder of the week. Only small daily fluctuations in rain coverage are expected. Around the United States, big heat will be the big story for the remainder of the week. Many large metropolitan areas from the Midwest to East Coast face high temperatures near 100 degrees with even higher “feels-like” temperatures. Locations from Oklahoma City to Omaha to Kansas City to St. Louis and even Philadelphia are under an Excessive Heat Warning.

Today and Tonight:  Some early sunshine will be followed by a deck of cumulus clouds bubbling up with the daytime warming, which will send highs into the low 90s. There may be just enough juice to instigate an isolated shower or thunderstorm but coverage will not be too extensive. Overnight will be muggy with lows in the mid 70s.

Up Next: To end the week, high and low temperatures move closer to normal. Also, rain chances will remain in the isolated category, the typical afternoon “pop-up” variety. Over the weekend, a bit more instability in the atmosphere may allow for a slight uptick in shower and thunderstorm development. 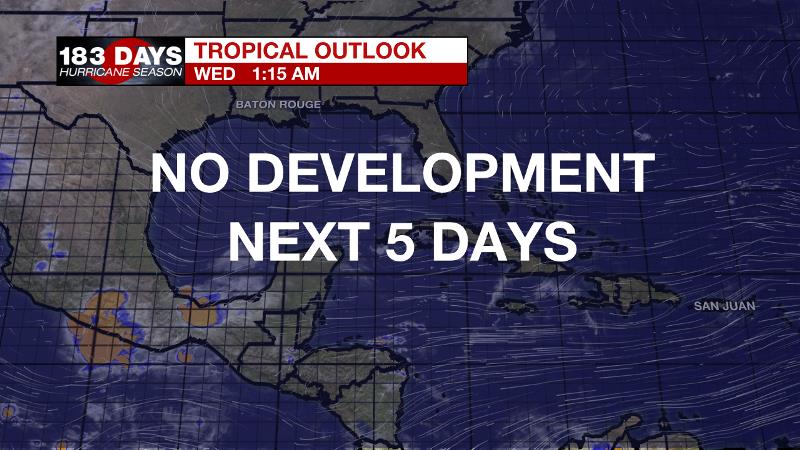 The deeper low associated with Barry’s remnants should open up into a wave of low pressure by Wednesday and scoot away from the region. Less action overall will result in warmer high temperatures, closer to the seasonal averages near 90 degrees. Nights will remain muggy and in the mid 70s. A broad upper level ridge will build over the region for the end of the week leading to a warmer and slightly drier pattern. Both the American and European forecast models are picking up on an inverted trough traversing the Gulf of Mexico beneath this broad ridge over the weekend. Due to this, an increase of showers and thunderstorms can be expected, but should follow the normal timing pattern.