Still influenced by some tropical moisture, rain chances will remain elevated for the local area. A downward trend in areal rain coverage is expected by the weekend. As you know, we try to remain transparent as a weather team. Many of our blogs over the last few weeks have been complimentary of good forecasts; however, yesterday simply did not play out as expected. Rain fell across almost the entire forecast area, which does not constitute scattered coverage as was forecast. Additionally, storms brought gusty winds and even a brief, weak tornado in Gonzales, which was not anticipated and not even warned by the National Weather Service. Fortunately, damage was minor with just a few branches down, some tossed patio furniture and a few lifted shingles.

Today and Tonight: Another generally cloudy day is ahead with scattered showers and thunderstorms. Like Monday, any storms could bring brief downpours and gusty wind. The pockets of rain should be progressive enough, moving from south to north, that widespread flooding should not be a major issue. Highs will be lucky to reach the mid 80s, held in check by thicker clouds and sporadic showers. Another very muggy night is ahead with mostly cloudy skies and lows near 74 degrees.

Up Next: Minimal change is anticipated for Wednesday with just a little less action out of the skies. A fast moving storm system to the north of the local area could provide a better chance for showers and thunderstorms on Thursday afternoon and evening—especially for areas north of the highways. By the weekend, warmer and drier upper levels will start to cut down on rain chances meaning that the first weekend of summer could play out to be a littler drier, but plenty warm and humid. 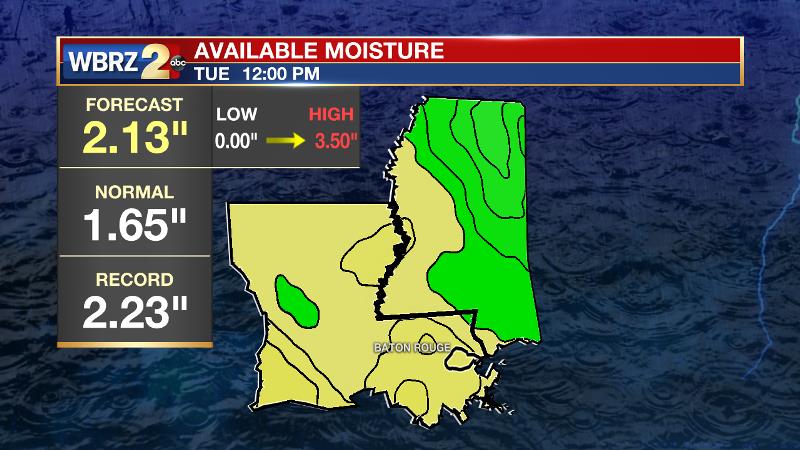 An inverted trough in the northwest Gulf of Mexico will continue to hug the western Gulf Coast with a tropical air mass from southwest Louisiana into Texas. The local area sits on the fringe of this deeper tropical moisture with precipitable water values near record levels for the date. Scattered showers and thunderstorms will flare up, especially during from the mid-morning to afternoon hours right through Wednesday. A shortwave trough will move across the middle of the country and by Thursday, the axis of this trough will create an area of positive vorticity advection over the local area. This could lead to increased rain chances late Thursday before an upper level ridge takes hold into the upcoming weekend. Moisture will be shoved northwest of the area and subsidence will quell some convective development. The result of these changes will be diminishing rain coverage. The translation is that scattered showers and thunderstorms will become isolated, afternoon showers and thunderstorms.