Beyond a cold front on Monday afternoon, nice weather is expected to welcome the new season. Spring begins at approximately 11:15am Tuesday.

Today and Tonight: A lot of fog and cloud cover will hang around through Monday morning. A cold front will move into the region around midday and may bring a brief, passing shower. Skies should clear quickly after that with high temperature plateauing in the mid 80s. Humidity will decrease into the overnight hours with clearing skies and low temperatures dipping into the mid 50s.

Up Next: As the new season starts on Tuesday, appropriately pretty weather is expected. With lots of sunshine and nice, comfortable air, highs will make it into the mid 60s. Wednesday and Thursday will both start in the 40s before highs get back into the 70s again on Thursday. The next time we will see any notable cloud cover will likely not be until Friday with rain holding off until at least Sunday and maybe later. 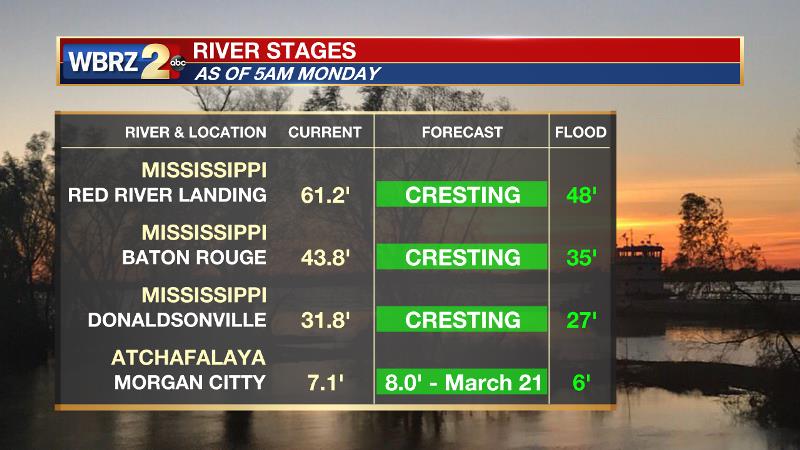 A weak surface trough will move through during the morning hours, continuing to provide southerly winds. However, lacking instability will likely keep storm chances to a minimum. Some moisture closer to the surface could be enough to create some brief showers as a cold front passes through around the midday hours. On the other side of the cold front, clearing skies and a northwesterly wind shift will begin to bring down temperatures and dew points, providing a more comfortable night. Due to cold air advection, a small temperature range is expected on Tuesday with highs likely failing to escape the 60s. The coolest nights will follow with Wednesday and Thursday both expected to begin in the 40s. Moderating temperatures will begin as onshore flow returns to end the week. The next storm system will be in the form of a stalled front north of Louisiana. This boundary will result in plenty of Gulf moisture streaming north to feed rain and thunderstorms.