That time when it was 14, warmer from here

Spring starts at 11:15 Tuesday. Of astronomical significance, the start of spring is the vernal equinox meaning the celestial equator of the sun passes earth’s equator from south to north. Of meteorological significance, that means heat season is on the way!

Today and Tonight: The spring sun will not have us sweating just yet. On the other side of a cold front, cooler temperatures will prevail. A few clouds may pass the area early, but ample sunshine will be the main feature up top. Highs will be in the mid to upper 60s with light, northwest winds. Overnight expect more of the same with lows in the mid 40s.

Up Next: Wednesday will bring another afternoon with highs in the 60s followed up by lows in the 40s. As clear skies continue, highs will be able to sneak back into the 70s on Thursday afternoon. Some clouds may become evident by Friday as onshore flow returns. This will pump thermometers above average toe end the week and for the upcoming weekend, but rain is not expected until at least late Sunday and probably not until Monday. 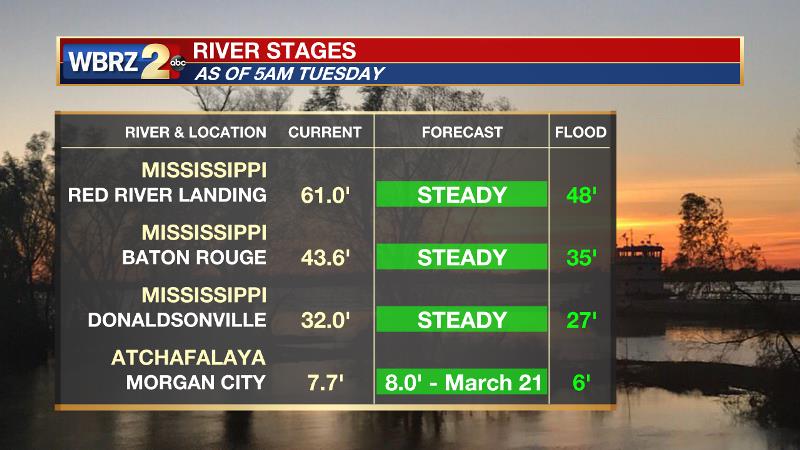 A broad area of high pressure will park over the Midwest through Thursday while a trough in the upper levels will keep cool temperatures in the eastern half of the country. Due to cold air advection, a small temperature range is expected on Tuesday with highs likely failing to escape the 60s. The coolest nights will follow with Wednesday and Thursday both expected to begin in the 40s. Moderating temperatures will begin as onshore flow returns to end the week. A weak ridge in the upper levels will result in above average temperatures Friday through the weekend. Highs will be able to reach the 80s. Onshore flow will result in more moisture, thus a more humid feel and low temperatures staying in the 60s. The next storm system will be in the form of a stalled front north of Louisiana. This boundary will result in plenty of Gulf moisture streaming north to feed rain and thunderstorms. Right now, forecast models are keeping rain out of the local area until Monday though.