A much drier pattern will begin to emerge today and last through at least Thursday.

Today and Tonight: Considerably lower rain coverage is anticipated for Tuesday. Showers and thunderstorms will most likely be limited to areas north and east of Baton Rouge. Some locations in Southwest Mississippi and along the I-55 corridor have received upwards of 4 inches of rain since Saturday and therefore it will not take much more to create some flooding issues. 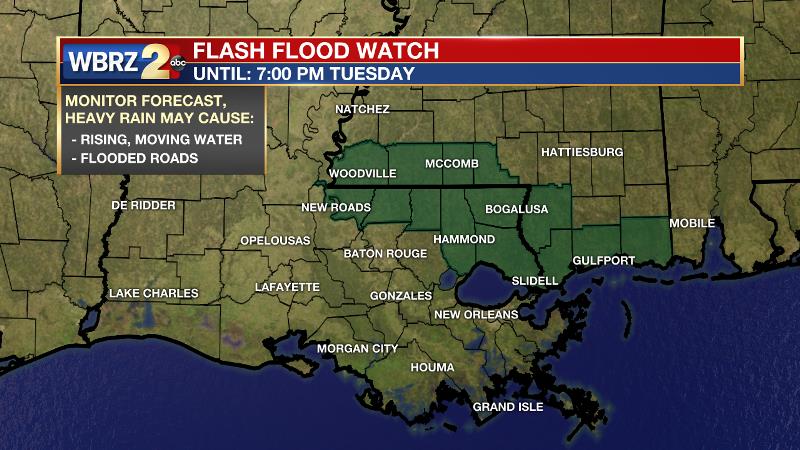 For that reason, the National Weather Service has continued the FLASH FLOOD WATCH for parishes and counties north of I-12 until 7pm. Any issues should be localized and limited to typical trouble spots that struggle with runoff. Keep in mind not to drive across a flooded road as you risk stalling out or being swept away. Elsewhere, partly sunny skies will allow high temperatures to climb into the low 90s. A stray shower or thunderstorm could occur, but most locations will stay dry. Overnight lows will be in the mid 70s beneath mostly clear skies.

Up Next: Wednesday through Friday are looking dry and hot. Rain chances are almost nil. Afternoon temperatures will make it into the low to mid 90s and stay there for several hours producing a longer duration of feels like temperatures near 100. Lows will be in the mid 70s. Exact timing is still being worked out, but around Saturday a cold front will come into the region. First, a round of strong to severe thunderstorms will be possible. Then, the front will then creep through the area with some lingering showers. Beyond the front, a brief and slight reduction in temperatures and humidity will be possible, but will not last for long. 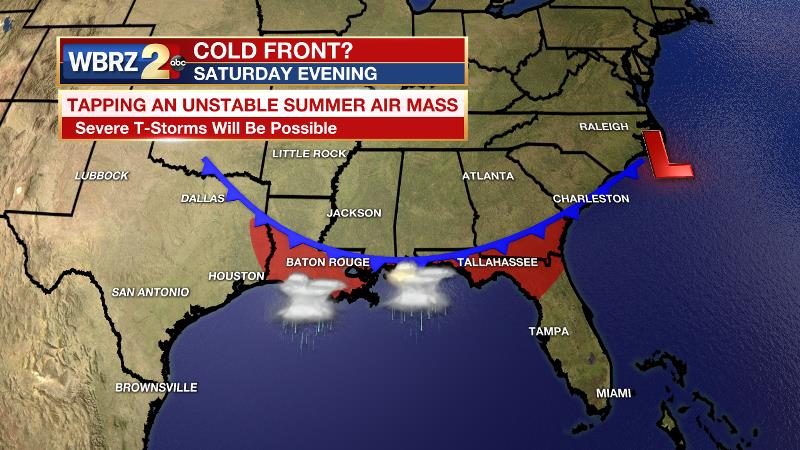 A weak low level trough remains just northeast of the forecast area with some upper level jet stream support between an upper low over the Gulf and an upper trough sinking southward over north Louisiana. Between these two features is a strong area of wind shear which will help with diffluence aloft. This will help a few convective bursts develop that could affect the northeastern portion of the forecast area today. An area of high pressure will build into the mid levels Wednesday through Friday. The stability and subsidence resulting from this ridge will lead to far fewer showers and thunderstorms and additional warming during the afternoons. High temperatures will rebound to slightly above average with some locations peaking in the mid 90s. Low temperatures will go unchanged, bottoming out in the mid 70s. Moving into the weekend, a fairly significant 50mb trough will be digging out of the Great Lakes region into the Southeast. With this trough will be an accompanying cold front at the surface. Present forecast model indications are that this front will indeed make it into the local area, perhaps clearing into the Gulf of Mexico by early next week. There are some timing issues as to exactly when this feature begins to affect the area. The GFS is faster, bringing the front in on Saturday while the ECMWF is leaning toward Sunday. While timing is unclear, models do agree on the scenario though. With regard to showers and thunderstorms—ample heat and humidity interacting with frontal lift should be more than enough to enhance development. More so, we will need to monitor the possibility of some strong to severe storms with gusty wind. Cold fronts don’t often have the chance to tap our energetic summer air mass. As far as temperatures go, the upper air mass does look fairly anomalous for the time of year. Modest drying will occur and some of this will translate to the surface. At this time, forecast models are showcasing dew points down by about 3-5 degrees into the upper 60s and high and low temperatures down 3-5 degrees, near 90 and 70 respectively. This is not a major departure from average but may provide a noticeable change. Either way, any relief should not last more than 24 to 48 hours.