Earlier this week, as the most recently developed branch of the U.S. military unveiled its new uniforms, fans of a certain science fiction television series began to comment that the prototypes looked very familiar.

The dress uniform features a series of silver buttons that run diagonally from the navy blue tunic's right shoulder to its waist.

The name pin is on the left side of the uniform's front under the wearer's left shoulder and a light blue collar is slightly visible below the uniform.

Some fans took to social media to say they felt the dress prototype looked remarkably similar to the Admiral's uniform worn by characters in the 2004-2009 sci-fi series, 'Battlestar Galactica.' 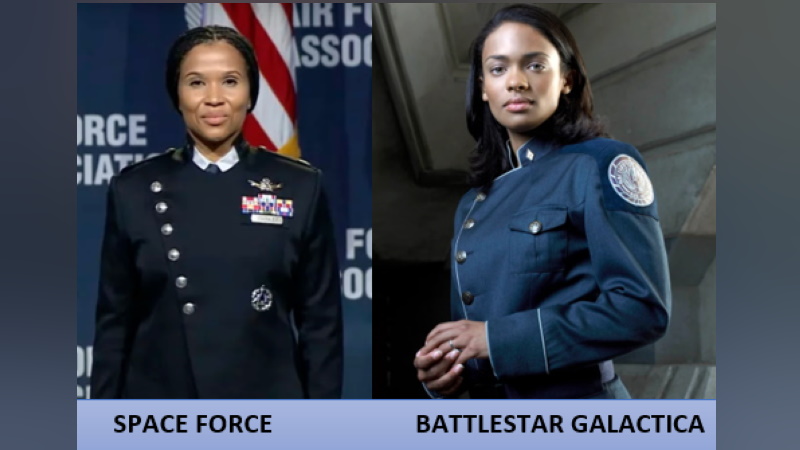 A friend just texted me: “Tell me the space force uniform isn’t a complete rip-off of battlestar galatica” and reader— https://t.co/UEyvBY573A pic.twitter.com/8teKYBPWC5

They include a T-shirt with the US Space Force symbol on the right side of the shirt's front and Space Force written in capital white letters across the back.

The black shorts and sweatshirt also feature the US Space Force symbol.

Last January, when President Trump revealed the official logo for the new U.S. Space Force, a number of individuals commented that they believed it was incredibly similar to the fictional Starfleet logo on the popular sci-fi series, 'Star Trek.'

Ahem. We are expecting some royalties from this... https://t.co/msYcJMlqjh

Trump just announced the new logo for the Space Force. The other is Star Trek Starfleet Command. pic.twitter.com/S7NeYdjR4C