Kelly's contract was released Tuesday evening, hours after LSU officially announced him as coach to replace Ed Orgeron.  WBRZ.com was first to report the contract details.

Kelly will make $9 million in his first year; $9.2 million in the following two years and the yearly salary grows every couple of years until he's making $10 million for his final year.

His contract also includes a zero-interest loan for up to $1.2 million to purchase a home within 30 miles of LSU.  "LSU, or an affiliated institution" will fund the loan, according to the contract terms.  The deal includes a penalty if Kelly leaves LSU before his ten-year contract is up.

The contract includes penalties should LSU fire Kelly, which would cost the university at least 90% of his salary - or as much as all of the contract's value if Kelly wins a national championship and leaves.

Kelly is obligated to pay as much as a quarter of his yearly salary if he leaves early, but only if he leaves while Scott Woodward is LSU's athletic director.  There would be no "damages" if Kelly leaves and Woodward is not the director of athletics at the time.

The contract also includes fifty hours of private flight travel a year for Kelly's personal use.

The Search Is Over

Brian Kelly has been named the next LSU Football coach! pic.twitter.com/AaZBOE2koc

Coach Kelly already appeared eager to get settled into his new role with LSU.

The epitome of a winner.

The next championship head coach at LSU pic.twitter.com/RCtjdE8V71

The 60-year-old Massachusetts native changed his Twitter profile pictures and personal info to reflect his ties to Baton Rouge and the LSU Tigers before landing in Baton Rouge Tuesday afternoon. 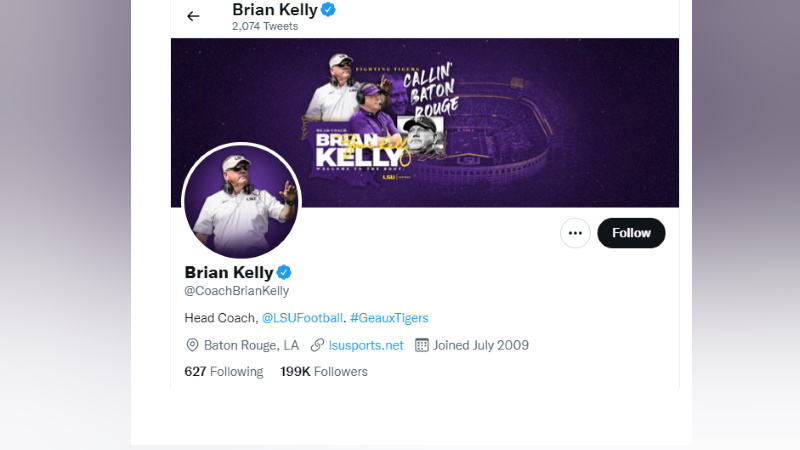 Kelly sent a message to his current players at Notre Dame Monday night, apologetic that they would find out the news of his departure through social media. Kelly reportedly discussed his departure with the team early Tuesday before flying to Louisiana.

The plan is for Kelly to meet with the team tomorrow at 7 a.m.

Here is the full message pic.twitter.com/sqAl2txZIy

According to the South Bend Tribune, Kelly's contract with Notre Dame ran through the 2024 season.

LSU's offer to Notre Dame coach Brian Kelly is a 10-year deal that will take him north of $100 million with incentives, sources tell @BrodyAMiller and me.

Fans welcomed Coach Kelly and his family when their flight arrived at the BTR Jet Center early Tuesday afternoon.