Quiet and seasonable weather is ahead for the remainder of the week. High and low temperatures will be within 5 degrees of each other through the week, so no major wardrobe shifts will be necessary in the near term! Only by Friday will clouds increase with the slight chance for a shower.

Today and Tonight: Tuesday will feature abundant sunshine with high temperatures near 60 degrees. Winds will be out of the northwest at 5mph. Overnight, a seasonable chill will be in the air with low temperatures in the upper 30s.

Up Next: Both Wednesday and Thursday, beneath sunny skies, afternoon highs will reach the low 60s. Mornings will be cool as expected for the time of year with lows in the upper 30s and low 40s. As we approach the weekend, an increase in clouds is expected with some eventual showers and thunderstorms associated with another front. Right now, the bulk of the activity looks as though it will occur on Saturday. While cool to cold again, no serious, long-lasting cold is foreseen on the other side of that front. In fact, as the calendar flips to February, the Climate Prediction Center is anticipating above average temperatures for the central Gulf Coast. 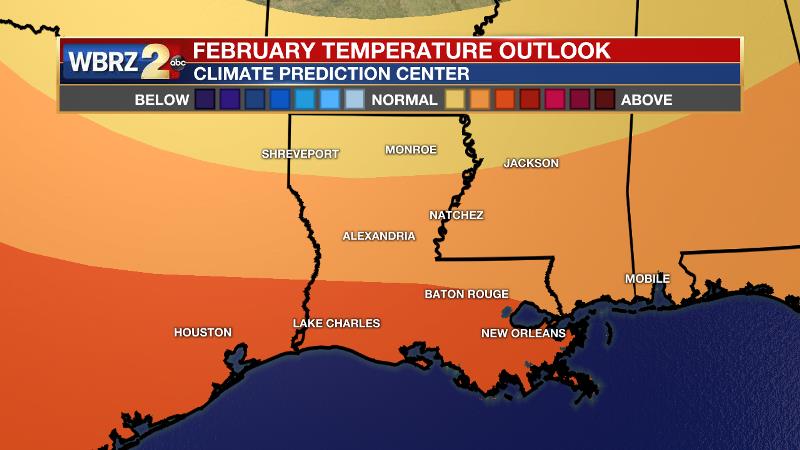 Behind Monday’s cold front, cooler and drier air will move into the region as surface high pressure builds over the central Gulf Coast for the rest of the week. Nighttime lows area wide should remain above freezing and daytime highs will be near 60. There is high confidence that another round of active weather will return by next weekend, but specifics are still sketchy. Clouds will begin to increase on Friday thanks to the development of deep southwest flow and resulting moisture return interacting with an area of positive vorticity advection in the mid-levels. A shower is possible. Then, an area of low pressure is expected to develop in the western Gulf of Mexico and possibly merge with a front. Depending on the track of this system, we will need to monitor the possibility of an area of heavy rain and maybe even some strong thunderstorms as well. Like Monday’s, the Canadian connection does not seem to be there with this front either, so it does not seem that a serious cold spell looms behind this one. However, we can still expect some lows in the 30s and potentially near freezing temperatures.