Negative reports related to Alexander come amid widespread criticism of the LSU's handling of sexual harassment and/or abuse cases while under Alexander's presidency.

As the university's current interim president, Tom Galligan now attempts to lead LSU towards an improved response to such cases, Oregon State University’s faculty union is turning its attention to Oregon State's current leader's alleged role in the accounts of injustice.

Prominent members of the Oregon State faculty union vocalized their concerns by means of a strongly-worded letter (view a copy of the letter below this article) sent to the university's Board of Trustees on Thursday (March 11) night.

According to The Oregonian, in the letter, the United Academics of Oregon State University (UAOSU) expressed distrust of Alexander's hiring process.

The Union also demanded a reason as to why the Board of Trustees has been silent since the release of last Friday's investigation, which strongly criticized Alexander's handling of sexual misconduct incidents while president at Louisiana State University.

Law Firm, Husch Blackwell directed a probe that was centered, for the most part, on LSU football, with scrutiny of allegations made against former coach Les Miles and several LSU players. After this, Louisiana's female state lawmakers added their voices to those speaking out against LSU for its past and current state of affairs in regard to sexual misconduct complaints.

In the recent letter from UAOSU, the faculty union said that it is “deeply disturbed by the recent corroboration of President F. King Alexander’s role in protecting the head coach and star players of Louisiana State University’s football team. In doing so, he prioritized athletics over protecting victims of sexual harassment and assault.”

Alexander responded Monday night with an 875-word letter to Oregon State’s community, reflecting on his regret for the lack of action against Miles while pushing back about mishandling sexual misconduct complaints.

UAOSU called Alexander’s response “tepid,” and said LSU's former president “has done nothing to ameliorate our disgust at his inaction or to address the unsavory aspects of his leadership at LSU.”

The faculty union asked the Board of Trustees about its lack of response in regards to the “depth of the problem created by this hire.” It then questioned several transparency aspects of the process when Alexander was hired last year. The faculty union also asked if the board knew about Alexander’s past issues regarding sexual misconduct issues at LSU, and whether Alexander misled them. The letter then urged the board to commit to an open search process rather than employ headhunter search firms.

“It is clear this search was badly bungled, and we deserve answers to these questions so that we can prevent a repeat in the future,” the letter stated. 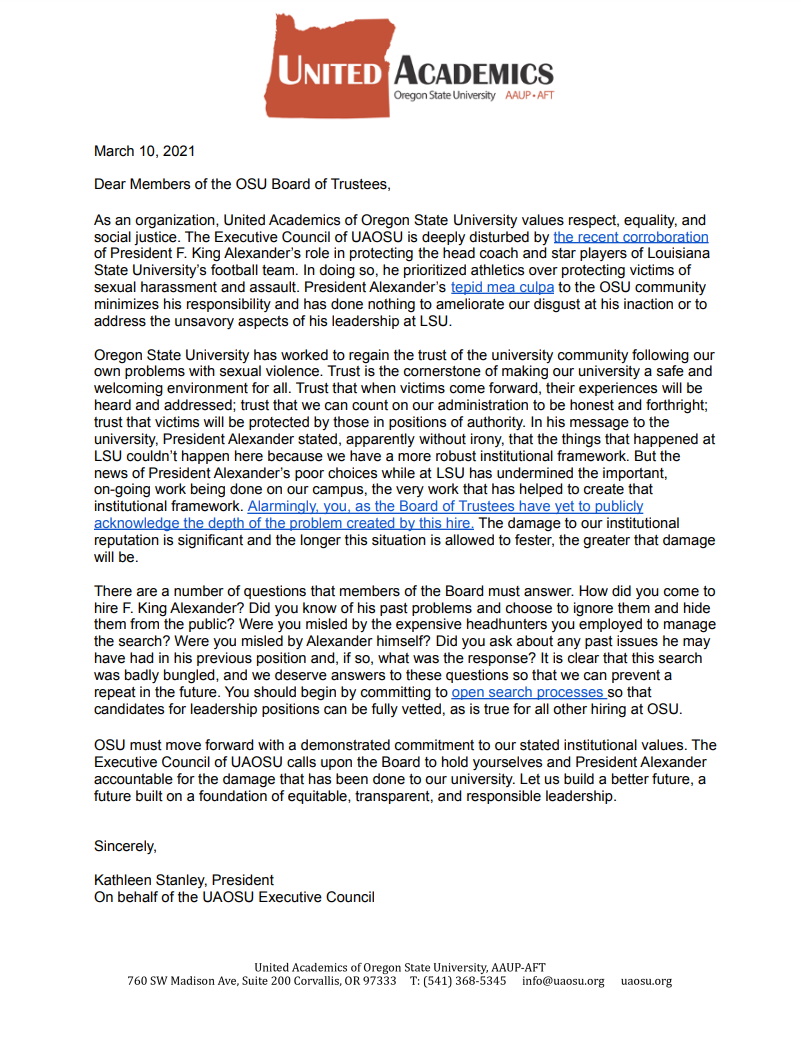