For the second consecutive year, the Mississippi River is spending a chart-topping number of days above the flood stage of 35 feet. As of Monday, June 15, the gauge at Baton Rouge had been above flood stage for 150 consecutive days (since January 18). That is the second highest total on record; only 2019 went longer with 212 spanning from January 5 to August 4. For perspective, historically, most Mississippi River flood events have lasted for well under 100 days. 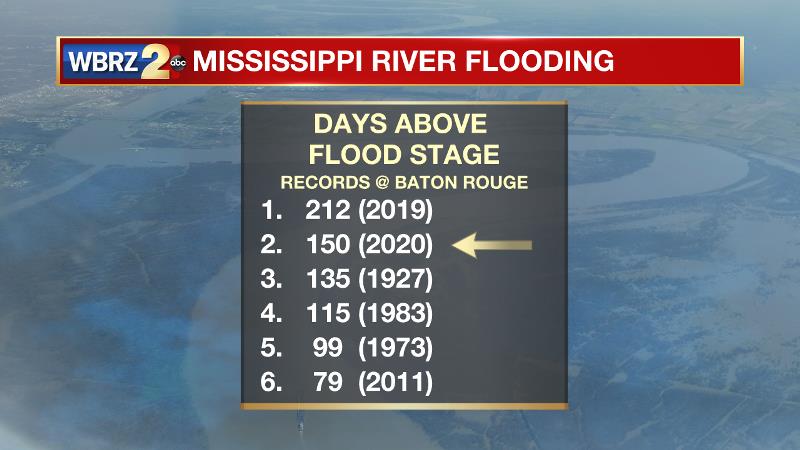 This year’s Mississippi River flood has garnered less attention, partially due to other significant news events, and also because the levels did not substantially threaten the area with any major impacts. The peak crest (provisional) was 44.58 feet on April 16—the 5th highest on record. In 2019, the U.S. Army Corps of Engineers considered operating the Morganza Spillway for just the third time in its history, but this ultimately did not happen. The Bonnet Carre Spillway did open in 2019—the first time that it had ever been used in consecutive years. From April 3 to May 1, 2020, the structure operated for a third straight year. This marked the 14th use since construction completed in 1931.

The latest forecast from the Advanced Hydrologic Prediction Service is for the Baton Rouge gauge to be below flood stage by June 21. A minimal rain forecast in the drainage basin to the north should help this forecast verify. As the WBRZ Weather Team has reported in the past, rain, and not snowmelt is the main culprit for river rises.