Heavy storms early Wednesday, rain in the forecast through Saturday

Several periods of active weather are in the forecast. First up is a slow moving rain maker for mid-week.

Today and Tonight: Wednesday will bring unsettled weather. Primarily, will be the threat of heavy rain. An inch or two is expected for most locations, but some isolated higher amounts are possible where thunderstorms persist. Secondary to this, one or two thunderstorms could be strong or severe up until early afternoon. A brief tornado and gusty winds are the main two threats. 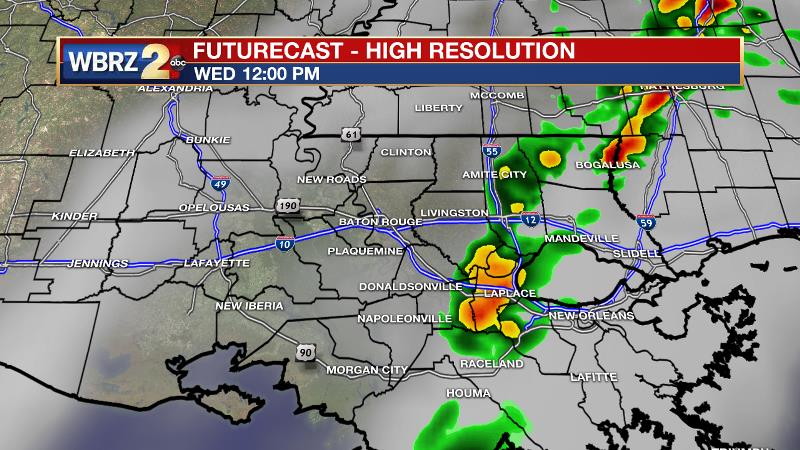 By mid-afternoon, rain should taper and we could even see some breaks in the clouds. Temperatures will be in the 70s early but trail off into the low 60s as the cold front chugs east later today. Overnight, clouds and isolated showers will continue with lows falling into the upper 50s.

Up Next: Showers and thunderstorms remain in the forecast right into the weekend. There will be breaks in the action, but beyond Wednesday, this is a difficult forecast in terms of timing. The most likely period to be dry is late Thursday into early Friday. Another strong system will swing through on Saturday bringing another shot at rain and thunderstorms. Within southeast Louisiana and southwest Mississippi, an additional inch or so of rain is possible through Saturday. Temperatures will stay above average, at least until a cold front passes east allowing a brief break from rain on Sunday. 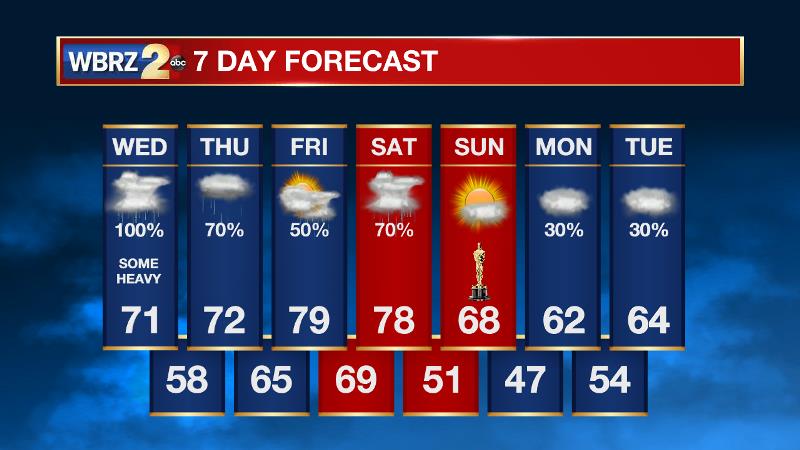 Onshore flow has primed the atmosphere to squeeze out a good bit of rain around the region. A stalled frontal system will allow rain and thunderstorms to persist across the area through Thursday, possibly training in some locations. Out ahead of the front, enough instability has pooled to allow thunderstorms to develop as well. The cold front and associated temperature gradient is impressive with the upper 40s in Alexandria and low 70s in Baton Rouge. There is also enough wind shear that any thunderstorms will have a window of opportunity to turn severe, mainly through the first half of Wednesday. A brief tornado or gusty winds are the main two threats. The Storm Prediction Center has placed the area under a 1 out of 5 “marginal risk” for severe weather. To be clear, the severe weather threat will stay secondary to heavy rain. The Weather Prediction Center has placed the area under a “marginal risk” for excessive rain. Generally, 1-2 inches is anticipated through Wednesday, but where training storms do take place, isolated higher amounts are possible and some nuisance flooding issues could develop. The area of thunderstorms will decay as instability and shear lifts north by Wednesday afternoon. The cold front will briefly nudge east, causing temperatures to fall from the 70s to the 60s by late afternoon as winds shift northerly. Some drying behind the boundary may even allow skies to temporarily clear. However, the boundary will then stall near the Louisiana Coast allowing scattered showers to continue developing at times through the week. There will be breaks in precipitation, especially late Thursday and early Friday, before a shortwave trough swings through the Midwest and sends another cold front through the region on Saturday. While it is still a little early to call, this system will also need to be monitored for the possibility of severe weather. Once this event clears, about 1-3 inches of rain is expected to have fallen since early in the week. These totals should be manageable for area rivers given the time span. Even after a break beyond the front Sunday, active weather looks to continue into next week.