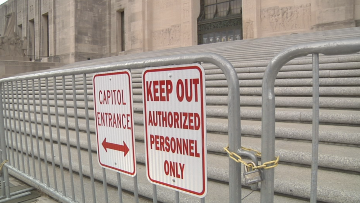 The front doors at the Louisiana Capitol have been closed for about two years as of summer 2017.

BATON ROUGE- It was supposed to be a simple waterproof job on the exterior of the Louisiana Capitol but inspectors found a more serious problem. Not that waterproofing the exterior of Baton Rouge's tallest building is a simple task, it's just that state officials had hoped this would all be over with by now.

The front doors of the 85-year-old structure were closed two years ago during the final months of the Jindal Administration. Officials said bits of limestone on the building's exterior were in danger of falling, putting the public at risk.

WBRZ asked Louisiana's Division of Administration in summer 2016 how much longer the doors would be shut. At the time, spokesperson Jacques Berry said inspections were underway and there was hope to waterproof and repair the exterior after 2017 legislative session.

However, this week Berry said inspectors discovered a more serious problem. Some of the massive limestone panels that encase the building are coming loose.

"I don't think anyone is in danger of a whole chunk of the limestone falling off," said Dan Miller, a construction manager with Cangelosi Ward General Contractors, the company contracted to do the repairs. "We're hoping not to find too many that have come loose."

The dimensions of the limestone slabs average four feet high, eight feet wide, and six inches thick, weighing a hefty 2500 pounds. Miller said they're unsure how many panels will need to be pulled out and reattached.

The work did begin this week and the front doors will stay shut for another year until the project wraps up, according the Division. The cost of the project is $5.3 million and workers will only clean and repair the first six floors of the structure, a portion known as the base.

"We can't mess with the building's foundation or change the aesthetics of the building at all," said Miller whose company specializes in restoring historic buildings.

Berry said another project to clean and repair the remaining 20-some floors of the Capitol's tower is also being considered, which means the front doors may get shut again.