Friday PM Forecast: Larry and the tropics, rain and the next front

Most areas will have an opportunity to dry out over the weekend. Several items are being watched next week for returning rain chances and possibly changing temperatures.

Next 24 Hours: Tonight will be clear and seasonably warm in the low 70s. Saturday is expected to bring mostly sunny skies with only a minimal chance for a stray shower. Humidity should remain somewhat in check but it will still warm into the low 90s.

Up Next: Sunday will likely end up dry for most locations as well, although humidity will creep up again. By Monday, enough moisture will be around for isolated, afternoon showers and thunderstorms. A tropical airmass, weak disturbance in the Gulf and upper level low will combine for scattered to widespread showers and thunderstorms Tuesday and Wednesday. This does not appear to be a major threat to our area at this time, but given the saturated grounds from Hurricane Ida, we will continue to monitor. A weak cold front is pegged to swing through by the end of next week and could lower the humidity in time for the weekend. CLICK HERE for your full 7-Day Forecast.

This is in "I'll believe it when I see it range" but... maybe a little reset/refresh ahead of the return to tailgating and the first home #LSU football game? #LaWX

The Tropics: Hurricane Larry continues to strengthen over the central Atlantic Ocean and is not finished yet. With maximum sustained winds of 100mph, it will become a major hurricane by tomorrow. Moving to the west-northwest at 15-20mph, Larry is expected to slow down in the coming days and does not pose any threat to land at this time. 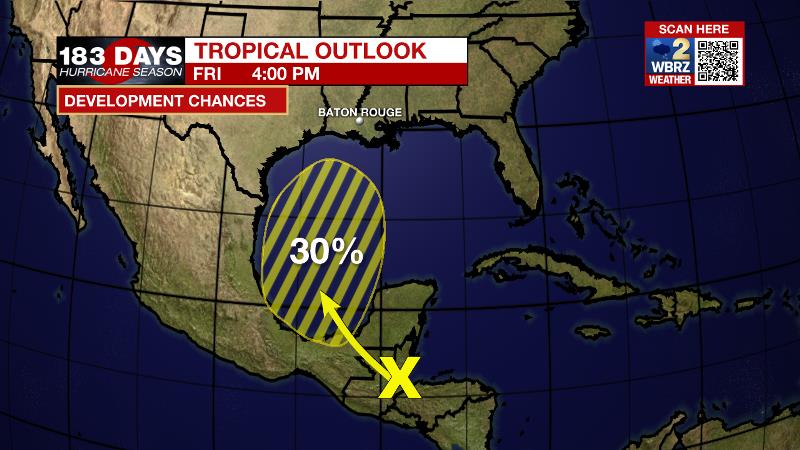 A surface trough over portions of Central America and the southern Yucatan Peninsula of Mexico is producing disorganized shower and thunderstorm activity. This system is expected to move west-northwest during the next day or two, and over the southwestern Gulf of Mexico late this weekend, and then move northward over the western Gulf of Mexico early next week. Unfavorable upper-level winds result in just a 30 percent chance of formation during that time. This system could spread some moisture across the central Gulf Coast to increase showers and thunderstorms during the middle of next week.

The Explanation: An upper level ridge will remain positioned over the central Gulf Coast through Saturday. Associated northerly wind flow aloft and sinking air will result in mainly dry conditions. However, hot temperatures are expected to continue during the afternoons for the same reasons. The ridge will begin to suppress on Sunday and a weak upper level trough will begin to deepen over the region early next week. This system will slowly turn the upper level flow southerly and saturate the atmosphere. Additionally, a weak tropical disturbance will send a plume of moisture over the area Tuesday and Wednesday. This disturbance will also create the lift needed to generate scattered to widespread showers and thunderstorms during the middle of the week. The disturbance will quickly be absorbed by the upper level trough and ejected away from the area. 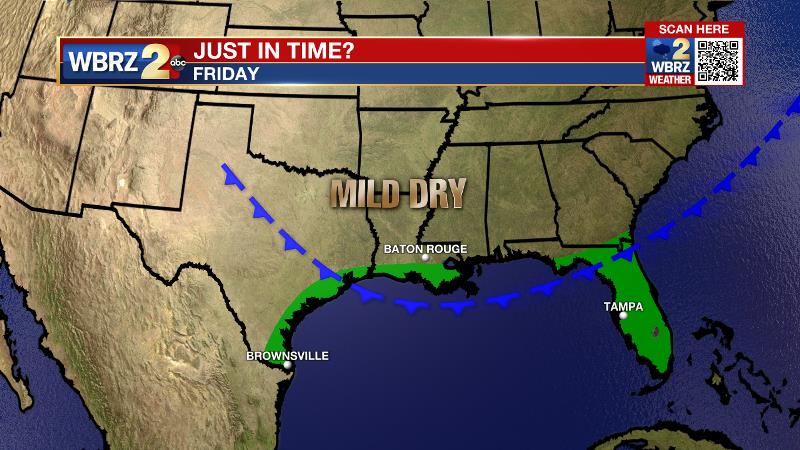 As these features depart to the northeast, wrap around winds will help to drag a cold front southward from the Midwest. This idea is well advertised by both major global forecast models and though the ECMWF is a bit more aggressive than the GFS, both suggest some cooler, clearer conditions will arrive toward the end of next week.