Muggy, soupy, sticky, whatever you call it... it's not pleasant.

Today and Tonight: Just a few showers are expected to pop-up this afternoon, mostly along the sea breeze front as it moves in. We will have partly sunny skies and temperatures near 92 to start your week. It will be very humid with dew points in the upper 70s. This will make the “feels like” temperatures climb well into the triple digits. In the hottest hours of today, it will feel like 100 degrees. Overnight lows will be near 76.

Up Next: The summertime pattern will continue for the next few days. Temperatures in the low 90s and overnight lows near 75 with very high humidity on Tuesday and Wednesday. Beware that 90s will feel more like 100s. We can’t rule out a few showers each afternoon, we are only expecting between 20-30% coverage on Tuesday and Wednesday. Starting Thursday into the nighttime hours, look out for more widespread rain, 50-60%. Highs will remain in the 90s through Friday before more rain and cooler temperatures move in for the weekend. 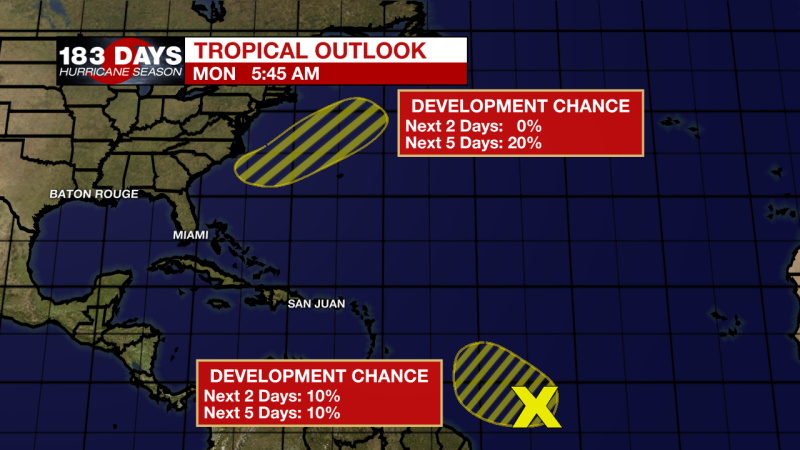 The Tropics: Shower and thunderstorm activity associated with a tropical wave located over the central tropical Atlantic has increased during the past few hours. Some slight development of the wave is possible during the next day or so while it moves westward to west-northwestward at around 20 mph. Strong upper-level winds are forecast to inhibit further development by mid-week. Formation chance through 48 hours...low...10 percent. Formation chance through 5 days...low...10 percent.

An area of low pressure is forecast to form off of the southeastern coast of the United States on Tuesday. Some development of this system could then occur later this week as it moves generally northeastward well offshore of the east coast of the United States. Formation chance through 48 hours...low...near 0 percent. Formation chance through 5 days...low...20 percent.

The sea breeze will be the main lifting force for any rain this afternoon. Through Wednesday the regular summertime pattern will dominate. The Bermuda high is helping to sustain southerly flow and provide moisture for afternoon convection. An upper-level ridge will shift west while a trough digs on Thursday. This pattern will persist through the weekend. An area of enhanced vorticity will bring more rain chances and potentially an MCS overnight on Thursday into Friday. An upper level low will become the dominating feature as we move into the weekend, enhancing convective activity during peak heating hours. Temperatures are likely to drop into the upper 80s for your highs.