NEW ORLEANS - The pilot who was killed in Tuesday's helicopter crash has been identified as 42 year old Joshua Hawley. He was a helicopter pilot since 2014. He served in the Marines and is a former Baton Rouge EMS paramedic.

The deadly helicopter crash occurred on the Bonnet Carre Spillway bridge Tuesday. The helicopter hit power lines as it crashed and blocked traffic on I-10 heading toward New Orleans.

Officials said plans to close the bridge for power line repairs were delayed Wednesday. The repairs will now happen Sunday.

Authorities issued the following information related to the closure:

The FAA said the aircraft went down around 12:30 p.m., Tuesday. Video posted on social media showed the wreckage burning on the interstate shortly after the crash.

The agency said only the pilot, identified as Joshua Hawley, was on board the helicopter at the time. Hawley, who is from the Greater Baton Rouge area, died in the crash. No one else was injured.

"This afternoon we learned of the tragic death of a former Emergency Medical Services employee, Joshua Hawley, in Tuesday’s helicopter crash on the Bonne Carré Spillway Bridge. Hawley served our EMS Department for four years, and was an valuable member of our City-Parish team.

Please join me in keeping his family, friends, and colleagues lifted in prayer as they navigate this loss. His memory will remain in the hearts of our residents for many years to come."

A GoFundMe was set up to assist Hawley's wife in covering the cost of his funeral and living expenses.

As of Thursday morning, the GoFundMe raised nearly $40,000 in less than 24 hours. 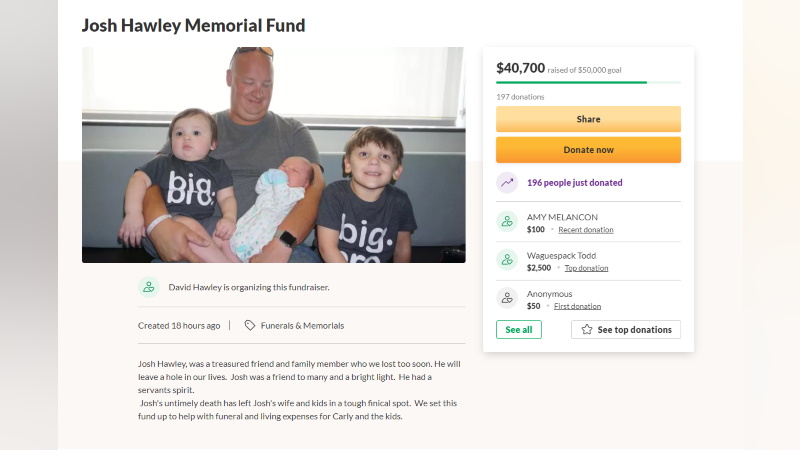 According to a statement from Entergy, when the helicopter struck a power line this temporarily knocked out electricity for about 20,000 customers in the Kenner and Metairie areas.

Photos shared by police showed the smoking remains of the aircraft.

A National Transportation Safety Board team is in Louisiana investigating the accident. It could take one to two years to complete the investigation. The wreckage was taken to an undisclosed secure location in Baton Rouge for inspection.