The National Snow and Ice Data Center (NSIDC) has reported that the Arctic sea ice extent reached its maximum on March 5, 2020, at 5.81 million square miles. This amount was the 11th lowest maximum in the 42 year record, and falls 228,000 square miles below the 1981-2010 average maximum of 6.04 million square miles. There were some isolated areas that were closer or slightly exceeded that long-term average, like near the Barents Sea (north of Norway) and the Bering Sea (south of the Bering Strait between Russia and Alaska), but overall extent was rather suppressed. 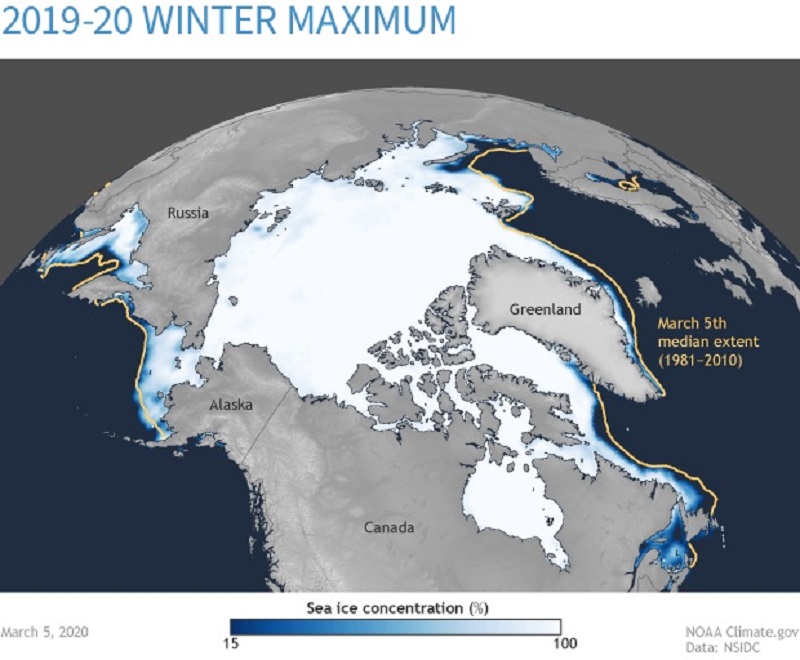 Arctic sea ice extent, which is the area where ice concentration is at least 15 percent, has not been declining in winter as fast as it has in the summer. Compared to the 1980s, there is very little sea ice that survives multiple years in the Arctic now. Even though the winter maximum and summer minimum cannot be correlated due to increased weather conditions during the summer months, it can be observed that the lowest minimums have occurred over the last 10 years.

The true concerning factor is the loss of overall global albedo. Albedo is the amount of light that is reflected off of a surface. This is why you are cooler in a white shirt versus a black shirt on a sunny day. Fresh snow and ocean ice reflect between 50% and 80% of the incoming solar radiation, where open ocean reflects around 5% - just 1% above asphalt. This lower global albedo could have a snowball effect on warming the climate, which could lead to increased evaporation rates and thus cause heavier rains and more frequent flooding in the future.