Tropical moisture will be slow to break and therefore plenty of afternoon showers and thunderstorms remain in the forecast. By next week, we have a shot at some drier but hotter conditions.

The Next 24 Hours: The nighttime hours will be largely quiet but also largely muggy. Lows will barely dip out of the 80s beneath partly cloudy skies. Some sunshine should welcome the weekend allowing high temperatures into the low 90s. Plenty of tropical moisture will make it feel much warmer, perhaps like the low 100s, and trigger scattered showers and thunderstorms during the afternoon.

After That: Though somewhat similar weather is expected Sunday and Monday, showers and thunderstorms should start to subside by Tuesday. This break in the afternoon action will mean that high temperatures will go into the low 90s and stay there for a while. Very little reduction in humidity will allow several hours will feels-like temperatures in the 100s and overnight lows in the mid 70s. Looking beyond the 7-Day forecast, a weak cold front may navigate into the Gulf South in the following week. The Climate Prediction Center even highlights a possibility of below average temperatures in the 8-14 day range. Plausible, as it will be September by then.

There are signals that a weak front will move into the Mid-South next weekend.

I don't expect major changes and wouldn't be surprised if it stalls to our north. #LaWX #MsWX pic.twitter.com/zrfPbzMkTX

The Tropics: As of Friday afternoon, Laura had diminished to a remnant low over the Ohio Valley. Elsewhere, we are reminded that hurricane season is far from being over. A tropical wave over the central Atlantic has a 30 percent chance of development over the next five days as it moves west into the Caribbean Sea. A new wave set to emerge off the African Coast has a 40 percent chance of development once it moves into the central Atlantic next week. 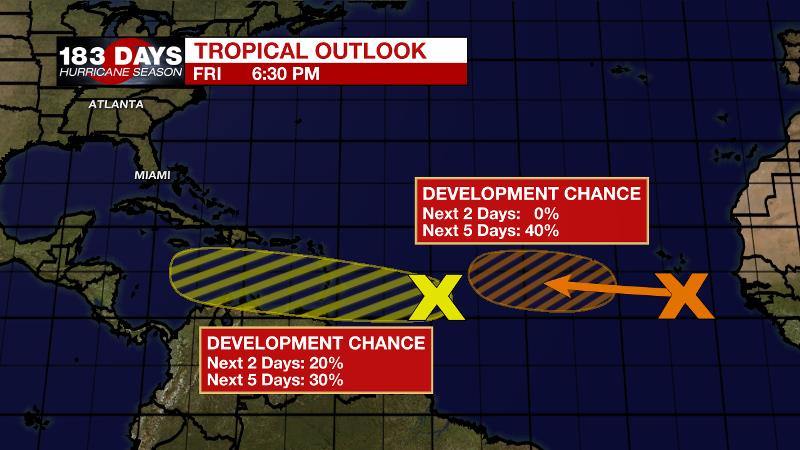 The Explanation: A general weakness of lower pressures and temperatures aloft will allow convection to fire during the weekend afternoons, though coverage should be lower than Thursday and Friday. Daytime warming and marine breezes should be sufficient to create scattered showers and thunderstorms Saturday, Sunday and possible Monday afternoons. A ridge of high pressure in the eastern Gulf of Mexico will build stronger over the local area by Tuesday, therefore tamping down convective development for a few days. However, this will mean hot temperatures and with humidity not abating much, triple digit heat indices can be expected. The two key global forecast models, the Weather Prediction Center and the Climate Prediction Center all point to a front of some sort pushing into the region during the first weekend of September. While it would be a little early climatologically, it is not unheard of and the signal is decent, so this could be something nice to watch for.