A frontal system will move into the Baton Rouge area this weekend. Expect scattered showers and thunderstorms, especially during the second half.

Today and Tonight: The week will end mild and in the 70s. Beneath mostly cloudy skies, an isolated shower or two will be around as well—especially north of I-10. Mainly cloudy skies will continue overnight with some fog developing on Saturday morning. Lows will be in the mid 60s.

Up Next:  The next front will bring isolated to scattered showers and thunderstorms to the area by Saturday—mainly later in the day. The local threat for severe weather has diminished. Only the northern third of the forecast area could possibly see a stronger storm, but that chance is low. The cold front will likely do the stall routine and keep showers and perhaps some thunderstorms around on Sunday. The stubborn front will prompt at least a mention of showers on Monday as well. Above average temperatures will continue until the next potent storm system arrives late Wednesday; and again, we will need to be aware of the possibility of severe weather. 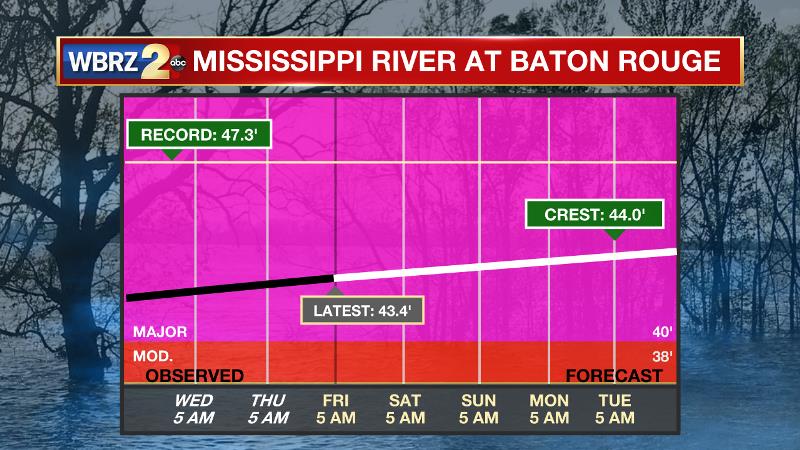 The Mississippi River: At Baton Rouge, major flood stage continues with a level of 43.4’ as of Friday morning. Though the classification of “major flood stage” sounds scary, impacts to land are minimal thanks to levee protection. The high water is primarily an issue for river traffic and river islands as well as a few spots north and south of Baton Rouge that will turn soggy along the banks. At this time, the river is projected to crest next week at a level similar to what was reached last year around 44’.

Deep, southerly flow will continue the moderating trend in temperatures for Friday and even bring enough moisture for some fog and an isolated shower to form through Saturday morning. Moving into the weekend, a more active weather pattern will develop. A strong shortwave trough will move out of the Midwest into the Mid-South taking on a negative tilt while doing so. In response, a surface low pressure will deepen with a trailing cold front sweeping east toward the Mississippi River. A decaying band of rain and thunderstorms is expected to push into the area later Saturday and last into Sunday morning. As far as the severe weather threat goes, it now looks as though the front will align from west to east, in tune with the upper level winds. This type of setup tends to marginalize the development of severe thunderstorms due to a lack of directional wind shear. 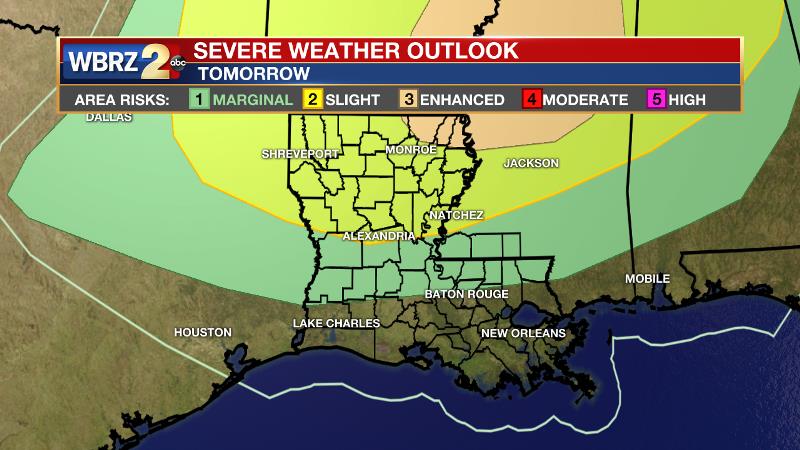 As expected in Thursday’s blog, the Storm Prediction Center has now confined the 1 out of 5 “marginal risk” risk to the northern third of the forecast area. With a stalling, weakening front occurring in our region, isolated to scattered showers will stay in the forecast through early next week. Another strong storm system will enhance rain coverage and bring the possibility for severe weather on Wednesday. Above average temperatures will carry through the 7-Day Forecast from there. The next pop of cool air appears to come by the end of next week or next weekend.