Warm temperatures are expected to round out the workweek. A frontal system will deliver showers and possibly a few thunderstorms this weekend—especially Saturday.

Next 24 Hours: Expect mostly clear skies overnight and low temperatures will join in earlier afternoon highs with a warming trend. Thermometers will bottom out around 61 degrees. A lot of sunshine will once again be seen on Thursday. Readings will top out near 84 degrees during the mid afternoon hours.

Up Next: Clouds will begin to increase on Friday and a stray shower could even develop as afternoon highs top out in the low 80s. A weakening cold front will approach the area overnight and into Saturday. A band of showers and embedded thunderstorms will move in on Saturday morning. The first hit of rain will come in the morning hours with tapering to follow, but because the front will be stalling and falling apart over the area, hit or miss showers may linger right through Sunday. With regard to the big football game Saturday, rain is more likely during early tailgating than during the game, but it still looks like a good idea to go into Tiger Stadium with a poncho. CLICK HERE for your detailed 7-Day Forecast. 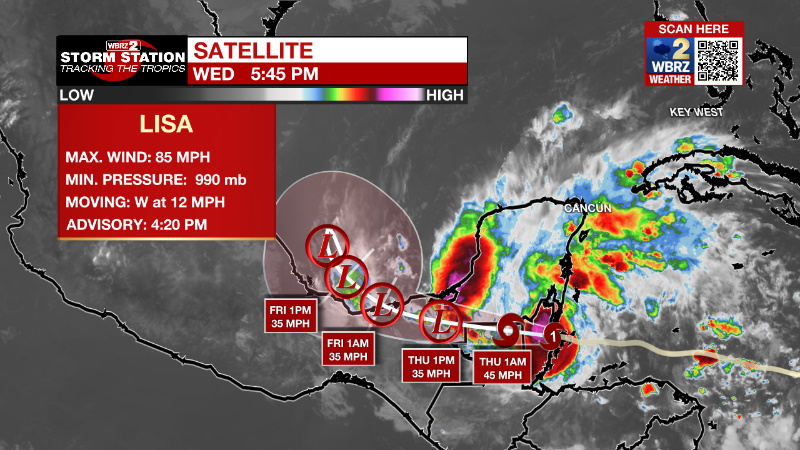 The Tropics: Hurricane Lisa made landfall around 4:20pm Wednesday about 10 miles southwest of Belize City. Maximum sustained winds were estimated to be 85 mph with a minimum central pressure of 990 mb. Lisa will slow down and turn more northwest while rapidly weakening overnight.

Hurricane Martin continued to intensify over the open Atlantic Ocean on Wednesday afternoon with maximum sustained winds of 85mph. The system is racing north at 30mph and will continue to accelerate over the far northern Atlantic. The storm will get larger and stronger Thursday before transitioning into an extratropical system.

The Explanation: With dry conditions prevailing thanks to an upper level ridge of high pressure, mostly sunny skies will drive high temperatures into the low to mid 80s once again on Thursday. Into Friday, low level moisture will increase so as temperatures ease back toward the rising dew points, some fog may develop. On Friday afternoon, an upper level trough of low pressure will dig into the Lower Midwest with an associated cold front developing at the surface over Texas. With a continued build up of moisture, clouds will move over the area as the day progresses. As the trough shifts northeastward into the weekend, the cold front will be pulled across Louisiana and Mississippi on Saturday morning. A line of showers and thunderstorms is expected to enter the area around daybreak. While severe weather should be limited due to lacking ingredients and the fact that storms will move in during the coolest part of the day, one or two stronger wind gusts will be possible along the leading edge of the precipitation. As the upper level trough of low pressure continues to lift away from the front, it is expected to slow down causing the line of showers and thunderstorms to taper, but linger. So, while the bulk of the rain is expected to occur during the first half of the day, lingering showers are possible through the afternoon and even into Sunday. Going into the work week, the forecast becomes a bit uncertain, as the location and intensity of a possible subtropical cyclone over the western Atlantic remains up in the air. Given the low confidence in any one specific solution, kept the forecast to remain generally quiet through the first half of the week.