Pleasant early February weather continues. Mornings have been chilly but afternoons have warmed nicely with most people only needing long sleeves or a light jacket. Don’t tuck the heavier layers away just yet, though.

Next 24 Hours: Low temperatures have outrun the forecast over the last two nights. Since conditions are virtually unchanged with clear skies and light winds, expect temperatures to fall into the mid 30s tonight—about three degrees cooler than anticipated in yesterday’s forecast. Some neighborhoods in southwest Mississippi could reach freezing. Another fully sunny day is expected tomorrow. High temperatures will build on the ongoing warming trend and top out in the upper 60s. One or two towns could hit 70 degrees.

Up Next: Friday will remain mostly clear as the moderating trend in temperatures continues. The lows will be in the mid 40s followed by highs near 70. Saturday will also be seasonably mild but a few clouds should develop ahead of an approaching cold front. The system will pass through on Saturday night, but likely without precipitation as the atmosphere should remain to dry. If anything, some showers could form near the coast or offshore. Another pop of cold air will follow for Sunday with a freeze possible by Monday morning. The cold air mass will be short-lived with highs returning to the 60s on Monday and Tuesday afternoons. CLICK HERE for your detailed 7-Day Forecast. 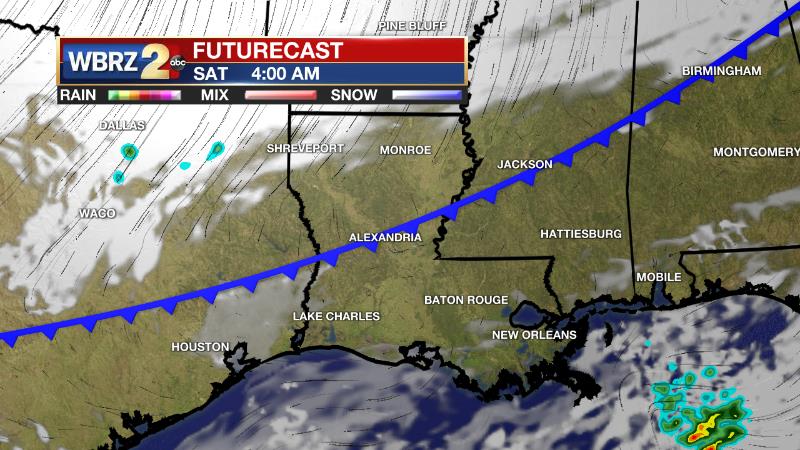 The Explanation: A very weak cold front will stall closer to I-20 tonight. The local area will not notice any changes from this boundary in terms of skies or temperatures. An upper level trough of low pressure over the Southwestern U.S. will move east and into the local area into the weekend. Ahead of this feature, winds will turn southwesterly art the surface causing above average temperatures to end the week. As strong upper level winds move through the trough, it will deepen and aid in the development of a surface low pressure system in the Western Gulf of Mexico on Friday. While that piece of energy will likely remain over open water, a very strong cold front will be driven through the area by the upper level trough. This system will move through late Saturday with almost all shower activity staying offshore. After the front passes, winds will shift back to the north, setting up a chilly second half of the weekend. Highs will be about 10 degrees below average on Sunday afternoon. Lows will be near freezing on Monday morning. Of late, forecast models have been trending too warm at night and too cool during the day, so the 7-Day Forecast has been adjusted to reflect this. Temperature moderation will continue through Wednesday before the next cold front moves in during the middle of the week. At this time, details are still broad but this system will likely return the chance for rain to the area.