Warm, mainly dry conditions for the week ahead

A hot and slightly drier weekend will carry into the new week. Overall, quiet weather is anticipated.

Today and Tonight: Expect a beautiful start to the workweek, as an area of high pressure is in control. The result will be plenty of sunshine with temperatures warming into the 80s around 10 AM. Highs will reach near 92 by mid-afternoon with calm winds. Tonight will be clear with lows near 71.

Up Next: An upper level ridge of high pressure will stay in place over the Southeast for the extended period. This will keep skies sunny and conditions dry. Temperatures will stay above average, but the silver lining will be lower dew point temperatures due to the dry air that has set up camp over our area. There is a chance that the ridge slides east late in the week, allowing for spotty to isolated afternoon showers Friday. This ridge could stay suppressed through the weekend, potentially keeping showers in the forecast. If this forecast stays, September may end up being the hottest and driest on record. 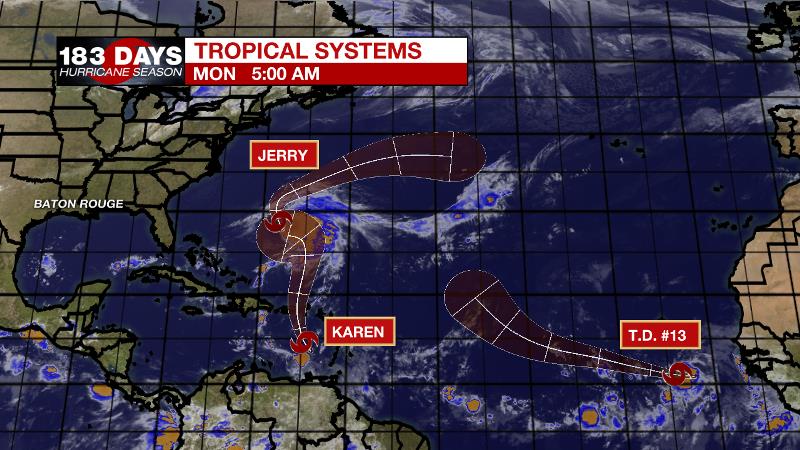 The Tropics: The Atlantic Basin is rather busy. Tropical Storm Jerry has maximum sustained winds of 55mph and is set to make a hard right turn toward Bermuda. The storm will bring rain, wind and some surge to the island. Tropical Storm Karen is south of Puerto Rico with 40mph winds and drifting north. Rain, wind and some surge are anticipated as Karen crosses over into this week. By the weekend, the storm will be stalling east of the Bahamas but it is unclear if it will stay on a northern track or slide west toward the United States. Finally, tropical depression 13 is freshly formed off the African Coast and is expected to become Hurricane Lorenzo on a track west, northwest into the central Atlantic. This one is days away from being a threat to any land, if it ever will be.

A very quiet weather pattern is forecast for the area through the week. A persistent ridge of high pressure stacked into the atmosphere will control the central Gulf Coast. Very little in the way of precipitation will be able to develop through the upcoming weekend. The ridge will become suppressed to the south and east a little bit during the latter part of the week as a trough passes to our north. However, the ridge will rebuild over the weekend. During that period when the ridge weakens, isolated showers may flare up west of I-55. Temperatures will continue to run above normal with daytime highs mainly in the lower to mid 90s.