For the second straight morning, Metro Airport in Baton Rouge saw a record low—this time tying the 1989 mark of 35 degrees. A moderating trend in temperatures is underway with no more 30s in the extended forecast.

Next 24 Hours: Skies will stay clear overnight. However, as light winds take on an east, or perhaps even southeast, direction, low temperatures will be up 10-15 degrees from the previous two nights. Expect daybreak temperatures around 49 degrees. Ample sunshine is in store for the final day of the workweek. Look for high temperatures close to average near 81 degrees on Friday.

Up Next: Football weather is looking rather nice for LSU and Southern, both with home games this weekend. Saturday will start in the mid 50s and warm into the low 80s beneath sunny skies. A repeat is expected on Sunday. Moisture will slowly collect in the atmosphere on Sunday and Monday, revealing a few clouds and slightly above average temperatures. The next front will arrive late Tuesday and into Wednesday. Early on, this is looking like the type of system that could come in the form of a line of showers and thunderstorms. More details about timing and strength will be known as we get closer. CLICK HERE for your detailed 7-Day Forecast.

The Tropics: All is quiet in the North Atlantic, Caribbean Sea and Gulf of Mexico. No tropical development is expected during the next 5 days.

The Explanation: A strong surface high pressure system will settle across the Southeast U.S. to end the week while the deep upper level trough of low pressure and cool air bounces to the east. This will allow a switch to southerly winds and a moderating trend in temperatures. Friday morning will just be a few degrees below average as the upper level trough moves further away to the east. Over the weekend, high and low temperatures will return to the 50s and 80s respectively. A few high clouds may pass through at times due to embedded pockets of moisture in the upper levels of the atmosphere. 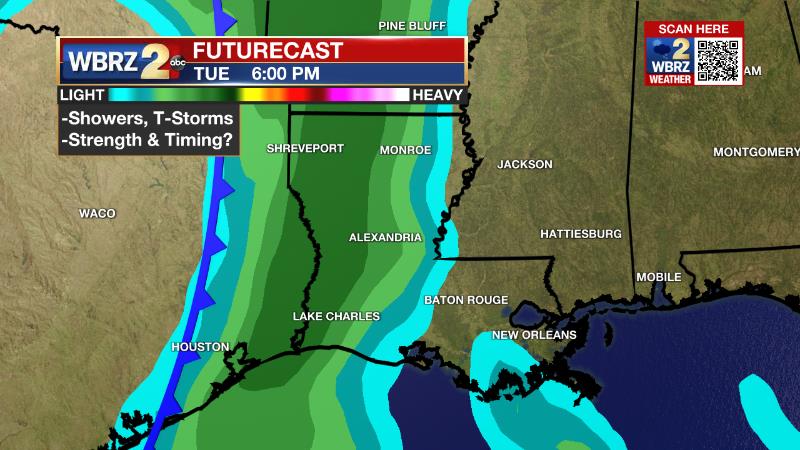 Moving into next week, an upper level trough of low pressure will drop out of the Mountain West into the Mid-Mississippi River Valley. As this occurs, it will merge with an upper level low moving east out of Mexico. This will deepen and sharpen the upper level feature as it moves toward our region. This type of upper level scenario suggests a line of showers and thunderstorms will march through out ahead of the associated cold front. Timing is the most difficult issue this far out but it does look to come in the Tuesday afternoon to Wednesday morning period.