Temperatures continue to slowly warm as we approach the weekend. The chance for a shower or two is set to reenter the forecast for some areas as well.

Next 24 Hours: Yet one more morning in the mid 60s is expected after a clear and quiet night. The workweek will end with a continuation of the gradual warming trend as afternoon temperatures flirt with the low 90s. There will be a lot of sunshine again. Light, east winds will begin to make a little humidity noticeable, especially closer to the lakes and coast. Coincidentally, there is an outside shot at a shower in these spots.

Up Next: Over the weekend, an onshore wind direction should return some moisture, low temperatures in the 70s and possibly an isolated shower for locations along and south of the interstates. In addition to high temperatures near 90 degrees, that familiar humidity will be felt as well, although not back to the levels felt just a few weeks ago. Those small rain chances will quickly diminish again early next week with a bout of late season warmth on tap. Several days in the 90s are possible next week. CLICK HERE for your detailed 7-Day Forecast. 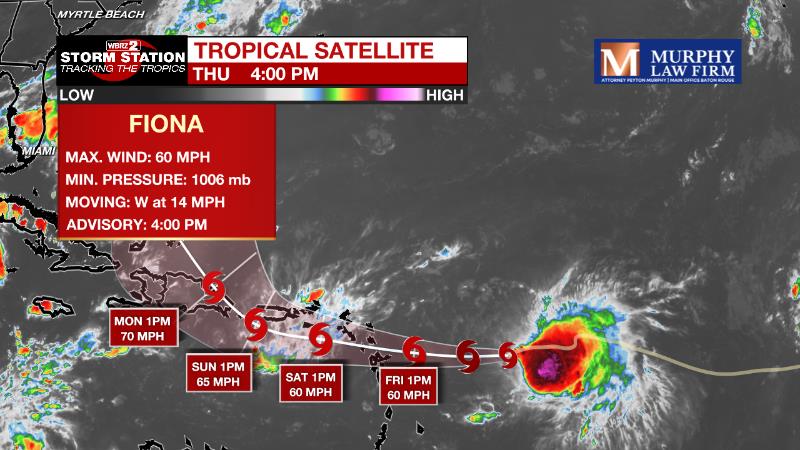 The Tropics: As of 4pm Thursday, Tropical Storm Fiona was located about 400 miles east of the Leeward Islands producing maximum winds of 60mph and moving east at 14mph. Fiona is expected to slightly and slowly strengthen into the weekend while slowing its westward motion. Storm force winds and heavy rain are expected across the Leeward Islands, Virgin Islands, Puerto Rico and Hispaniola. The highest elevations of Puerto Rico could pick up about ten inches causing serious flooding.

The Explanation: On Friday, a surface high will slide into New England having and therefore having less influence on the local weather. With this feature exiting and surface winds taking on an east to southeast direction, the front from earlier in the week will glide north toward the coast. Through Sunday, this boundary will activate a few showers and thunderstorms, primarily offshore. While some of them will drift west in the weak steering winds aloft, they will interact with continued dry air aloft which will make it hard for them to advance inland with any strength. Generally, chances for a shower or thunderstorm are in the 30 percent range along the coast trailing off to 10 percent around I-12 and near zero into Mississippi. Early next week, an upper level ridge of high pressure will slowly build eastward over the Midwest helping to diminish the old front. Our position on the southeast side of the ridge will cause drier continental air to flow into the area from the northeast. The twofold effects will be continued dry conditions but unseasonably warm temperatures. Average high temperatures for the third week of September are in the upper 80s but it looks like with the ridge centering over the Mid-Mississippi River Valley by next Thursday, most of the workweek will feature maximums about 5 degrees above normal. The drier air aloft will mix down tot eh surface keeping humidity from returning to August levels and low temperatures will be closer to average in the upper 60s and low 70s.