The weather pattern will be in transition on Thursday. Much more of the area can expect to see showers and thunderstorms Friday through Sunday.

Today and Tonight: After a seasonably sticky start to the day, Thursday will find high temperature reaching the low 90s prior to the afternoon flare up of scattered showers and thunderstorms. Winds will be light and southerly. Overnight, activity will diminish with lows in the low to mid 70s.

Up Next:  Friday through Sunday will feature a less stable atmosphere over Louisiana and Mississippi with the result being scattered showers and thunderstorms. Development will occur a little earlier, with activity possible from late morning into the late afternoon. Daily rain coverage will be in the 50 to 70 percent range. As usual, thunderstorms this time of year can bring a fast inch of rain and frequent lightning. There is also an outside shot of gusty wind. More precipitation and cloudiness will serve to stop high temperatures just shy of average for the time of year, which is 93 degrees. The next relatively drier trend will come early next week. 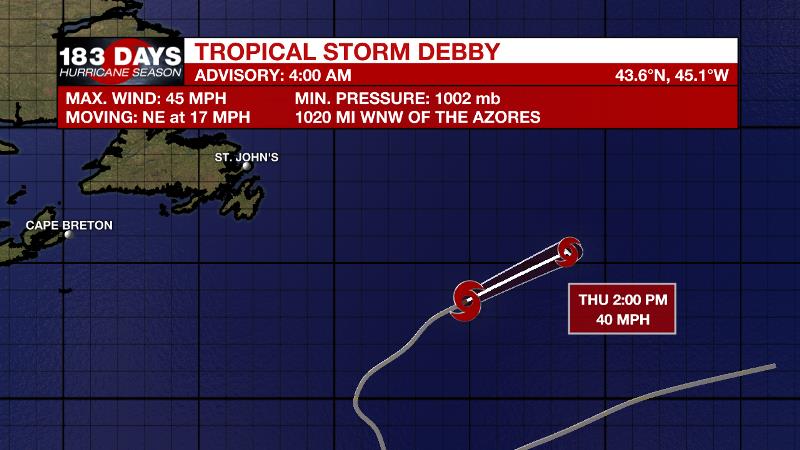 The Tropics: While the Gulf of Mexico and Caribbean Sea remain hot but quiet, Tropical Storm Debby barely qualifies the central Atlantic as active. The storm has 40mph winds and will accelerate northeast and eventually dissipate over open water by Friday. The Eastern Pacific is very active right now with three named storms churning. Hurricane Hector is beginning to move away from Hawaii but we still create heavy surf as will Tropical Storm John for southern California. Tropical Storm Kristy is gaining strength with an uncertain track in the Pacific, but is nowhere near land right now.

A weakness between two 500mb ridges has been responsible for several days in a typical August weather pattern. An upper level trough will dig into that weakness beginning on Thursday and will bottom out over the Mid-Mississippi River Valley on Friday. The axis of that trough will extend to the central Gulf Coast leading to more shower and thunderstorm activity through the upcoming weekend. Daytime heating will still be a key driver of precipitation locally, but there are a few caveats. First, a front is expected to stall out from North Carolina to Oklahoma. This boundary will not be close enough to the local area to directly enhance development but if any storm complexes can drift south away from it, they could feasibly make it into southwest Mississippi and southeast Louisiana—nighttime included. At this time, forecast models continue to show very little in the way of vorticity maxima, or upper disturbances, that could also enhance action. Sometimes these are subtle and hard for models to detect so this will be evaluated with remote sensing on a day-to-day basis. The general rule of thumb will be 50 to 70 percent coverage of showers and thunderstorms, primarily during the afternoon hours Friday to Sunday. Downpours and frequent lightning can occur in any storm this time of year. On Friday and Saturday, strong winds cannot be ruled out either. By early next week, a ridge is expected to build back into the area from the east, once again curtailing rain coverage.