Starting the thaw, y'all

Sunshine and 6-9 hours above 32 degrees should allow considerable thawing on Thursday. One more freeze is expected tonight before a milder weekend.

A *WIND CHILL ADVISORY* is in place for the entire forecast area until 9am Thursday morning. Frostbite and hypothermia can occur in as little as 45 minutes due to feels-like temperatures in the teens. Wear a hat, gloves, scarf and multiple loose fitting layers.

Today and Tonight: Thermometers will climb above freezing by noon Thursday. With ample sunshine, there should be a 5 to 6 hour window for the combination of daylight and above freezing temperatures for significant melting and evaporating of ice. Most of what is left on the surface streets should be gone after today and significant improvements should be noted for shaded and elevated areas as well. Highs will top out in the low 40s during the afternoon hours. Winds will be a bit lighter, meaning wind chills will not be an issue during the afternoon, but certainly stay bundled up as it remains cold. Tonight, skies will stay clear and temperatures will dip below freezing after 8pm. Ultimately, look for lows near 27 degrees.

A *HARD FREEZE WARNING* will again be issued Thursday night into Friday morning. Temperatures will get closed to 25 degrees for several hours. Have a warm place for people and pets that otherwise do not. Take precautions to prevent pipes from bursting.

As icicles melt and fall, they present a legitimate danger. Be aware of what is above you! Unfortunately, as large towers are nearby, we in the television biz (and our cars) know this too well! #LaWX #MsWX #cold #ice pic.twitter.com/gKuWcoWPvI

Up Next: Unlike the cold stretch in early January, this spell was deeper but fortunately shorter. On Friday afternoon, high temperatures will return to the 50s. Saturday morning will be above freezing followed by a mostly cloudy afternoon in the upper 60s. On Sunday, fog will be a nuisance in the morning and then thermometers will stretch for the 70s by afternoon. Previously, it looked like a cold front would bring showers and thunderstorms later in the day but it now appears that the front will arrive later allowing rain to hold off until night. That cold front will clear the area Monday afternoon and temperatures will not be nearly as cold on the other side of that one. 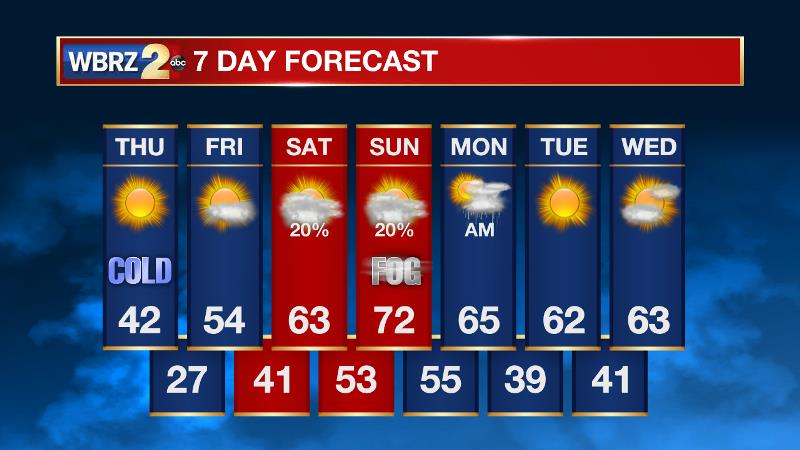 A surface high pressure system parked over the Mid-South will maintain clear skies and cool temperatures through Thursday. However, zonal flow developing in the upper levels will return Thursday afternoon allowing the coldest air to retreat northeast. Temperatures will respond by moderating into the 40s. It is noted that temperatures above freezing for more than 6 hours with full sunshine is typically sufficient to thaw remaining ice on shaded and elevated surfaces. Hopefully, this will take care of the remaining ice and allow for closures to be lifted by afternoon. Any ice that melts and does not evaporate will be able to refreeze tonight. A weakening shortwave trough will then push across the region on Friday night but due to continued dry air in the low levels of the atmosphere only increased cloudiness is anticipated. Temperature moderation will continue through with Friday highs in the upper 50s followed by above freezing temperatures on Saturday morning and then a high in the upper 60s. The arrival of some low level moisture by Saturday may allow an isolated shower to develop, but that is all. As the lower levels continue to saturate due to warm southerly winds being transported over cooler bodies of water, fog formation will be likely into Sunday morning. Temperatures will continue to warm as deep, southerly winds take hold. Yet another shortwave trough advancing from west to east across there country will lead to positive vorticity advection on Sunday causing the fog to dissipate but also instability to increase. Due to this and an associated cold front, showers and thunderstorms will develop on Sunday night. There may also be enough wind shear available that this environment will need to be monitored for the potential of stronger thunderstorms. Temperatures will fall only modestly behind that front with seasonable readings into next week.