Wednesday morning began with the 12th freeze of this winter season. Much milder conditions are expected ahead of a round of showers and cold front tomorrow night.

The Next 24 Hours: It will feel much different when you wake up on Thursday morning. While a jacket is still recommended, some of those heavier layers can stay home since lows will be in the low to mid 40s instead of the 30s experienced earlier this week. Clouds will thicken through Thursday. A sprinkle or light shower is possible west of the Mississippi River, but unlikely. Exactly how soon we go overcast does have implications on the temperature. If there is some sun available during the first half of the day, a few locations will reach 70 degrees. If clouds dominate throughout, we will be locked into the upper 60s. Winds will be a bit higher than previous days, out of the south at 10-15mph.

After That: A cold front will enter the region on Thursday night. A broken line of showers is anticipated into Friday morning. At that time, the cold front will settle in the northern Gulf of Mexico. However, it will remain close enough to the area for a lot of cloud cover to persist and some showers to hang on, especially south of I-10, through Friday. In fact, there is a chance that these dreary conditions are maintained into Saturday as well. Bigger changes have been made to the latter portion of the forecast. 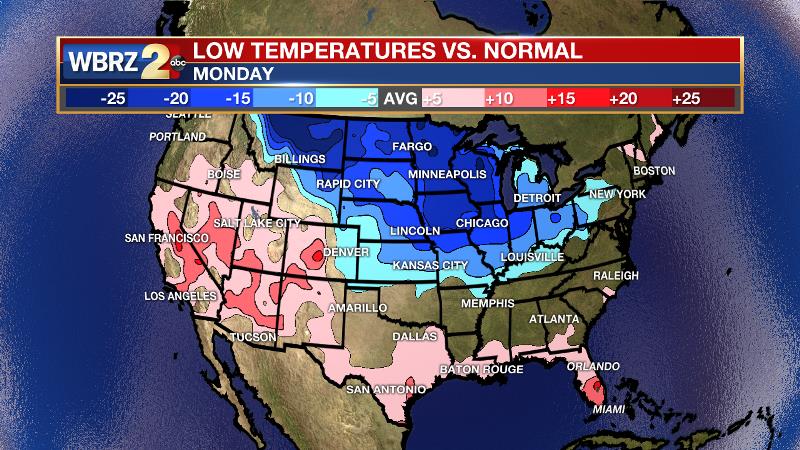 The cold front previous expected to send really cold temperatures for early next week no longer looks as robust. A series of weak system could maintain an unsettled period with above average temperatures into the middle of next week. The cold air locked up to the north could dislodge and head south later next week but that time falls beyond the forecast frame. Confidence remains low due to large fluctuations in the model guidance. CLICK HERE to view your complete 7-Day Forecast.

The Explanation: Winds will shift southerly resulting in a much warmer start and finish to Thursday in the 40s and 70s respectively. Onshore flow will also promote advancing moisture and increasing clouds. As a cold front slips into the region on Friday morning, scattered showers will develop. Winds aloft will remain west to east meaning the front will lose its southward push. It is expected to stall along the coast into the weekend and therefore it could stay dreary on Saturday with clouds and lingering showers south of I-12. If the front can drift a little farther south, there is a chance for some sunshine Saturday afternoon. A second cold front will push into the region Saturday night or Sunday morning. Precipitation looks uneventful with this front. The upper level trough driving this front will remain over the northern third of the country and lock the colder air up there with it. Therefore, next week is likely to begin with above average, rather than below average temperatures. A series of fast moving shortwave troughs and associated weak front could cause clouds and showers to stay in play through Wednesday. Once that upper level trough does release, the cold air that builds up behind it could be released south and even colder than initially advertised. This will be a pattern change we will monitor for the second half of February.