NEW: Florida shooting suspect Nikolas Cruz has been booked into Broward County jail and is charged with 17 counts of premeditated murder. https://t.co/JHLFnayPjg pic.twitter.com/w1xatwDXtc

UPDATE: The Broward County Sheriff says that 17 people are dead after Wednesday's shooting.

PARKLAND, Fla. (AP) - Authorities say they're responding to a shooting at a Florida high school and the school has been locked down.

The Broward Sheriff's Office has told news outlets the shooting happened Wednesday afternoon at Marjory Stoneman Douglas High School in Parkland. At least one person is dead and 14 have been taken to hospitals.

Broward County Sheriff: "We have multiple casualties...there are folks that have lost their lives." https://t.co/4QuB0GYG2P pic.twitter.com/ItEUHMx9rR

Authorities say the suspected gunman is 19-year-old Nikolas Cruz, a former student who had been expelled from the school. The Broward sheriff believes an AR-15 was used in the shooting.

He was found off-campus and taken into custody. No other arrests have been made. 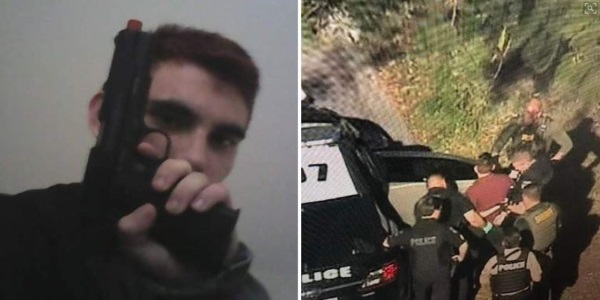 This is a picture from someone INSIDE the high school right now https://t.co/XOx2qYBjjS

Coral Springs Police said on their Twitter account Wednesday that the school is locked down and that students and teachers inside should remain barricaded until police reach them.

TV footage showed at least one person being wheeled to an ambulance on a gurney while emergency workers appeared to be helping others on the sidewalk. The news broadcasts also showed students running across the street.