No total washouts in the forecast

Tonight & Tomorrow: By 8PM, showers will be out of the area and temperatures will be falling into the low 80s. Overnight temperatures will fall into the mid-70s and we will be left with mostly clear skies. Sunny start for your Sunday with temperatures in the mid-70s. One of the drier days in the forecast but showers are still expected. Cloud cover will begin to build into the area as the day goes on. Temperatures will top out near 90 degrees. Shower and storms will start popping up in the afternoon hours. Not expecting a total washout for your Sunday, but storms could keep you inside for a brief period. With the showers and storms heavy downpours and frequent lightning are possible. By the early evening hours conditions will have dried out across the area leaving us with partly cloudy skies.

Up Next: Not expecting very much change in the forecast for your workweek. Waking up Monday morning to mostly sunny skies and temperatures in the mid-70s. Throughout the day temperatures will creep into the low-90s. Plenty of moisture will allow for heat index values to reach the triple digits during the peak daytime heat hours. Showers and cloud cover will begin to build into the area as the day goes on. The rainy pattern will stick around for the workweek. Waking up to temperatures in the mid-70s. Daytime highs will top out in the low-90s with showers bubbling up during the afternoon hours. Overnight temperatures will cool back into the 70s. Localized areas could see heavy downpours and some poor street and drainage flooding after repeated rounds of rain. Click here to see the 7-day forecast.

We are monitoring three areas of potential development. As of now none are a direct threat to the viewing area. 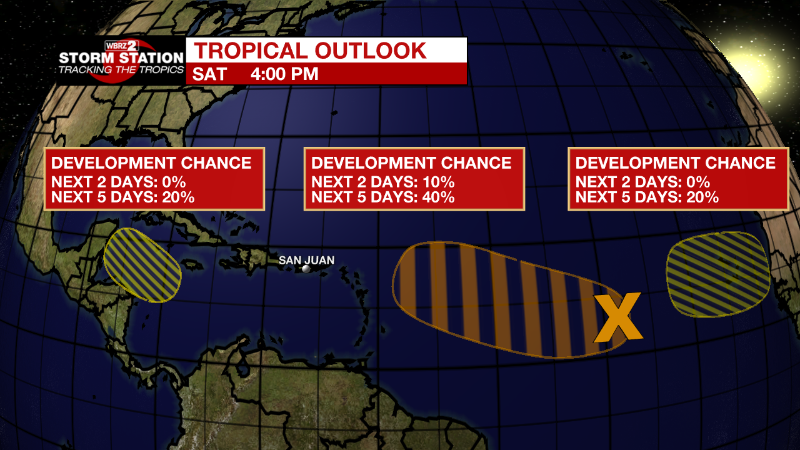 Central Tropical Atlantic:
An elongated area of low pressure associated with a tropical wave
over the central tropical Atlantic Ocean is producing some
disorganized showers and thunderstorms. Environmental conditions are
forecast to be generally favorable for some gradual development of
this system over the next several days, and a tropical depression
could form by the middle of next week as it moves west-northwestward
at 10 to 15 mph toward the waters east of the Leeward Islands.
* Formation chance through 48 hours...low...10 percent.
* Formation chance through 5 days...medium...40 percent.

Northwestern Caribbean Sea:
A trough of low pressure could develop over the northwestern
Caribbean Sea during the early or middle part of next week.
Environmental conditions could support some slow development of the
system thereafter while it moves generally west-northwestward over
the northwestern Caribbean Sea and toward the Yucatan Peninsula of
Mexico.
* Formation chance through 48 hours...low...near 0 percent.
* Formation chance through 5 days...low...20 percent.

Eastern Tropical Atlantic:
A tropical wave is forecast to move off the west coast of Africa
early next week. Some gradual development of the system is possible
during the middle of next week while it moves generally westward
across the far eastern tropical Atlantic.
* Formation chance through 48 hours...low...near 0 percent.
* Formation chance through 5 days...low...20 percent.