Quieter weather will be restored on Thursday. Some showers and thunderstorms may develop with the daytime warming, but will not be as significant as Wednesday. Most location received rain on Wednesday with general amounts of 1-2 inches. The possibility of isolated totals up to 3-4 inches was there, but fortunately, very few locations saw that much. 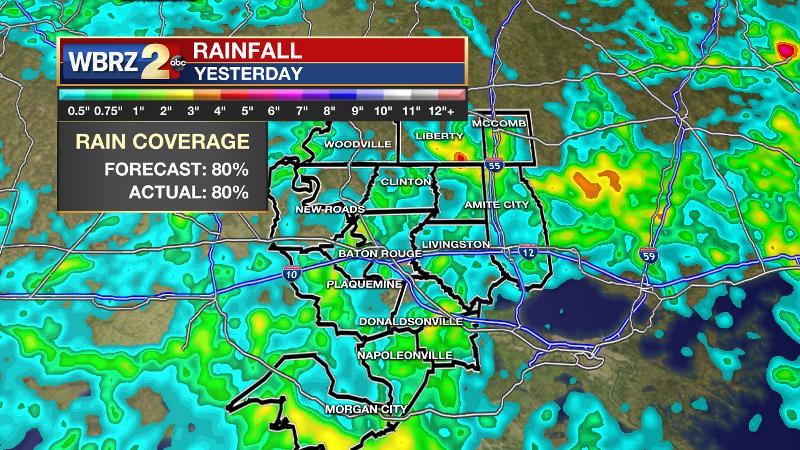 Today and Tonight: A weakening cold front draped across our region may lead to isolated showers and thunderstorms developing—especially south of I-12—but there should not be as much action as yesterday. High temperatures will be in the average range, topping out in the low 90s. Overnight will be mostly clear with low temperatures in the mid 70s.

Up Next: Much of the area may eek out a dry afternoon on Friday. Mostly sunny skies will allow highs back into the mid 90s. Standard August weather is anticipated for the weekend with highs in the mid 90s, lows in the mid 70s and isolated, mainly afternoon showers and thunderstorms. 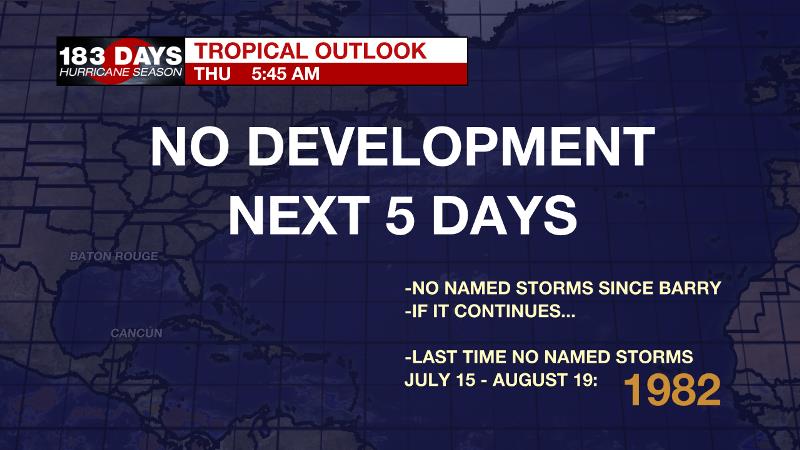 The Tropics: The Gulf of Mexico, Caribbean Sea and Atlantic Ocean are quiet at this time. No tropical development is expected over the next 5 days. With no named storms since Barry on July 15, should nothing develop through August 19, it would be the first time that stretch of time has been storm free since 1982, which was a historically quiet hurricane season. That information comes courtesy of Philip Klotzbach of Colorado State University.

A weakening front will stall along or just south of the coast. Convergence along the front will lead to development of showers and thunderstorms but this may be confined to coastal areas to end the week. Standard, isolated convection is expected to develop Saturday and Sunday afternoons. The upper level ridge of high pressure will be confined to the Southwest U.S. therefore keeping thermometers close to average. Both global forecast models are showing an inverted trough rolling from east to west across the central Gulf Coast early next week. This would lead to a slight uptick in showers and thunderstorms.