BATON ROUGE - Extraordinary layers of failure are on display at the State Office of Juvenile Justice after a teen escaped their custody and was then placed in a jail cell while carrying a loaded gun.

Brennan Hebert, 16, broke out of the St. Martinville facility with another teen, Damarion Simmons, about two weeks ago.

After Hebert was rearrested, he turned over to guards through his jail cell a loaded handgun, according to sources familiar with the investigation.

When Hebert bolted from the facility on Jan. 16, he and Simmons stole a vehicle that had guns inside. Investigators believe Hebert dropped Simmons off in Pointe Coupee Parish and continued on to Mississippi until he ran out of gas. That's where investigators tell WBRZ he stole a truck and drove back to Louisiana where he was captured on Highway 61 between Baton Rouge and St. Francisville.

The WBRZ Investigative Unit for a week asked the Office of Juvenile Justice and its secretary, Bill Sommers, for an interview since the escapes started making news. Sommers and OJJ spokeswoman Beth Touchet Morgan have denied those requests.

On Thursday morning, the WBRZ Investigative Unit began asking questions to the Office of Juvenile Justice about Hebert being rebooked with a loaded weapon.

Calls to Sommers were ignored. Touchet Morgan responded to our questions, "no comment." Friday afternoon, State Police and the OJJ issued a joint statement confirming the report. 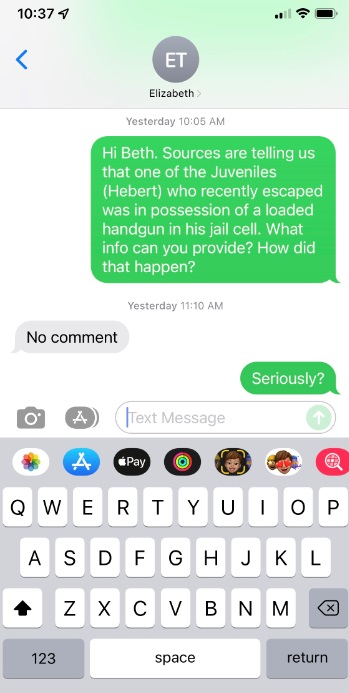 Simmons has managed to escape three of the Office of Juvenile Justice facilities during the past three months.

In November he left the Bridge City Center for Youth near New Orleans. One month later, he bolted from the Acadiana Center for Youth in Bunkie. He was recaptured after being on the run for nearly two weeks just after Christmas. He was then taken into custody and booked into an OJJ facility in St. Martin Parish. He escaped again from that facility with Hebert about two weeks ago.

The WBRZ Investigative Unit exposed that no head count was done for nearly 13 hours. Simmons and Hebert left around 7 p.m. from that facility, but were not discovered missing until 8 a.m. the next day.

HOW DID IT HAPPEN?

Sources close to the investigation tell the WBRZ Investigative Unit there were numerous layers of failures. When Hebert was rearrested by law enforcement he was brought to a hospital.

Law enforcement who took him into custody missed the loaded weapon he carried, according to multiple sources. He was rebooked into the St. Martinville State Office of Juvenile Justice facility and workers there also failed to find the gun, according to sources.

"We could easily be burying more law enforcement officers," a source close to the investigation said. "This is inexcusable what happened."

Sources close to the investigation said the Office of Juvenile Justice did not alert state investigators about this until the WBRZ Investigative Unit began asking questions.

Following the discovery of a firearm in a holding cell at the Acadiana Center for Youth in St. Martinville, investigators with Louisiana State Police, the St. Martin Parish Sheriff’s Office, and the Louisiana Office of Juvenile Justice have initiated an investigation into circumstances of the incident.  The firearm was discovered in the possession of a 16 year old juvenile escapee recently taken into custody on Thursday, January 20, 2022 by LSP Troopers.

The arrest of the male juvenile took place on U.S. 61 near Thomas Road in East Baton Rouge Parish after Troopers located an occupied stolen vehicle in connection with two wanted juvenile escapees.  Troopers discovered one of the two juveniles in the stolen vehicle and learned of the details of the escape, multiple vehicle burglaries, an alleged accidental shooting with a stolen weapon, and two vehicle thefts committed by the two escapees.  The 16 year old juvenile was taken into custody, treated at a local medical facility for injuries sustained in the escape, and booked into the East Baton Rouge Juvenile Detention Center.   The second juvenile escapee was discovered several days later in Pointe Coupee Parish by local law enforcement search teams.

On January 25, 2022 corrections officers at the Acadiana Center for Youth St. Martinville facility discovered a hidden firearm after the 16 year old juvenile admitted to bringing the weapon into the secure facility. The circumstances of how the firearm was brought into the facility is part of the joint investigation.  The investigation remains active and ongoing and further information will be released when available.

“Upon discovery of the contraband, OJJ reached out to local law enforcement to conduct a thorough investigation,” stated Louisiana Office of Juvenile Justice Deputy Secretary William Sommers.   We are fully cooperating in this investigation to assure the safety of the youth in our care, our staff and general public.”

“Yesterday afternoon, our agency was briefed on the incident by the Office of Juvenile Justice and took immediate action to begin the investigatory process,” stated Colonel Lamar Davis, Louisiana State Police Superintendent.  “As the investigation progresses, we will make certain all circumstances of the incident are investigated thoroughly to ensure accountability at all levels.”