Picking up where the last week left off

The new, short workweek will begin much as the last ended. Afternoon showers and thunderstorms will enter the picture by late in the week while temperatures remain consistently warm and humid.

Today and Tonight: Look for some early, passing clouds to give way to mostly sunny skies into the afternoon hours. You can rarely put a rain chance at zero in the warm season but any shower development will be highly isolated and confined to areas west of the Mississippi River. Temperatures will ramp up into the low 90s with feels like temperatures in the upper 90s. Overnight will not offer much cooling as lows remain in the low 70s.

Up Next: The high pressure that has kept conditions warm and dry will continue through Wednesday. A weakening frontal system will approach from the northwest on Thursday. This brings with it enough instability and lift to return isolated, afternoon showers and thunderstorms. Rain coverage will be around 30 to 40 percent into the weekend as the front stalls and fragments over our area. Since the shower activity will not be widespread, most locations will remain warm. Highs reach the low 90s and lows will stop in the low 70s through Sunday. 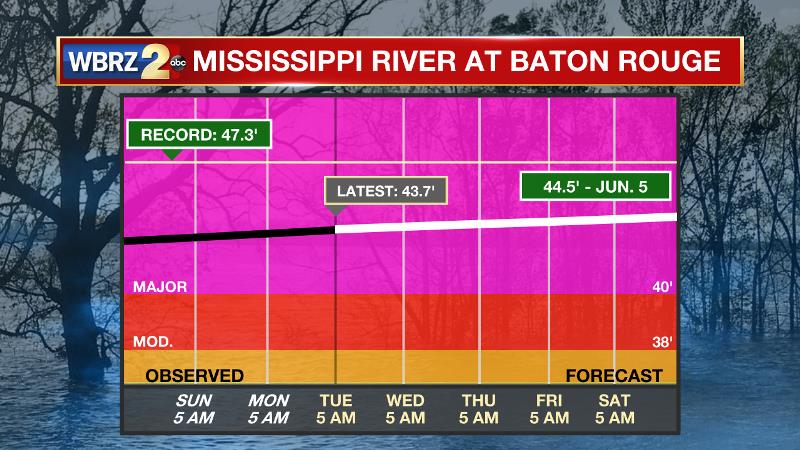 The Mississippi River: At Baton Rouge, major flood stage continues with a level of 43.7’ as of Tuesday morning. Peaking at 44.1’ on March 19, the river set its 7th highest recorded crest at Baton Rouge. At 143 days, this year marks the longest period above flood stage at Baton Rouge. With another round of heavy rain occurring in the Midwest, runoff will now result in a second, higher crest in early June. The current forecast is for the level to reach 44.5’, which would be one of the top five highest crests on record. The Morganza Spillway will be opened to mitigate flood risk downstream into the Baton Rouge area. This will increase water levels over unprotected areas over the Atchafalaya Basin. On the Mississippi River, the high water will remain an issue for river traffic and river islands, although some inundation will continue for unprotected low-lying areas. The city of Baton Rouge and the main LSU campus are protected by levees up to 47 feet. Some soggy areas and seepage may be noted due to the long duration of high water placing pressure on the levees. As some of the Mississippi River diverts into the Atchafalaya River, gauges at Krotz Springs and Morgan City will stay high as well. This creates backwater flooding in parts of Assumption Parish in areas such as Bayou Chene, Stephensville and around Lake Palourde.

The better rain chances will stay just west of the Mississippi River through Wednesday. This is due to a large surface high pressure system and upper level ridge remaining across the Southeast U.S. As this complex departs east on Thursday, rain coverage will begin to increase. A cold front will approach from the west, which should provide the lift needed to spark development while a touch more instability is anticipated due to the lowering atmospheric heights associated with the departing ridge. Into the upcoming weekend, a more normal warm season pattern of afternoon showers and thunderstorms is expected.