One more warm and dry afternoon, changes for the weekend

After the coolest morning of this unseasonable stretch, a warm afternoon is ahead. Expect a gradual return of humidity as we approach the weekend.

Today and Tonight: Ample sunshine will guide thermometers into the upper 80s and low 90s Thursday afternoon. Humidity will remain low for late July thanks to dew point temperatures in the 60s. Overnight will not be quite as cool, but readings could still sneak into the upper 60s in many locations.

Up Next: Friday will be a transitional day as humidity and rain chances will come back by Saturday. Sunday will feature a bit more action than Saturday. Near the remnants of our friendly summer cold front, a non-tropical low pressure system has developed. This weak low may fling added moisture for showers and thunderstorms to parts of the central and eastern Gulf Coast through the weekend. This system does not appear to be a significant threat. A persistent forecast is carried into early next week with highs near 90, lows near 70 and isolated to scattered showers and thunderstorms--mainly in the afternoon.

Good news... conditions are just going to remain too harsh for any tropical development along the stalled front in the Gulf. @NHC_Atlantic just bumped chances to zero. #tropics #BatonRouge pic.twitter.com/XLJjEYDGnZ

The Tropics: A decaying front and weak low pressure system are producing widespread cloudiness and disorganized showers across the northern and central Gulf of Mexico. Significant development of this system appears unlikely due to dry air and unfavorable upper-level winds while the disturbance drifts northward during the next couple of days. The National Hurricane Center does not expect tropical development. 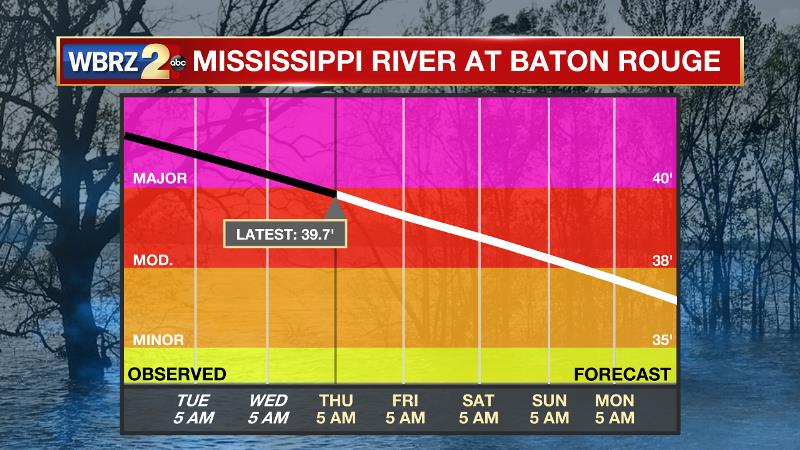 The Mississippi River: At Baton Rouge, major flood stage continues with a level of 39.7’ as of Thursday morning. This marks the first time Big Muddy has fallen out of major flood stage since February 26. Peaking at 44.1’ on March 19, the river set its 7th highest recorded crest at Baton Rouge. At 200 days, this year marks the longest period above flood stage at Baton Rouge. The water level will steadily fall and finally go below flood stage during the first week of August. The high water will remain an issue for river traffic and river islands, although some inundation will continue for unprotected low-lying areas. The city of Baton Rouge is protected by levees up to 47 feet. As some of the Mississippi River diverts into the Atchafalaya River, gauges at Krotz Springs and Morgan City will stay high as well. This creates backwater flooding in parts of Assumption Parish in areas such as Bayou Chene, Stephensville and around Lake Palourde.

North winds will maintain dew point temperatures in the 60s through Thursday. Onshore flow will be restored by the weekend with seasonable humidity and rain coverage back in play. Along the former cold front, a non-tropical surface low has developed due to the temperature differences between cooler air to the north and warm water. This system will remain rather aimless over the next several days. It could tap warm water and gradually take on tropical characteristics as it meanders in the north, central Gulf. No model guidance suggests any significant deepening of this system. Dry air and wind shear will make for a rather harsh environment. Eventually, the low should slide eastward as the sub-tropical jet stream allows another trough to dip across the southern third of the country early next week. This unusually far south position of the jet stream will snare any surface impulse near the coast and pull it north and east. At this time, there does not appear to be any significant threat to the local area or United States for that matter. The aforementioned trough expected to lower into the Southeast next week will likely provide more instability for showers and thunderstorms to develop.