Tonight and Tomorrow: After a hot and humid day, the mugginess and spotty cloud cover will stay with us through this evening. The added atmospheric moisture and cloud cover will allow temperatures to stay in the low 70s overnight with light winds out of the southeast. Humidity will stay elevated as dew points near 70°, and slowly increase through your Monday into the mid-70s. Spotty showers will lead to afternoon storms that will linger through the majority of the evening to start off the workweek. This rain is all associated with a passing, broken cold front that will not have enough strength to break through into the Gulf. Temperatures will be slightly cooler, but still above normal and peaking in the mid-80s through the early afternoon. 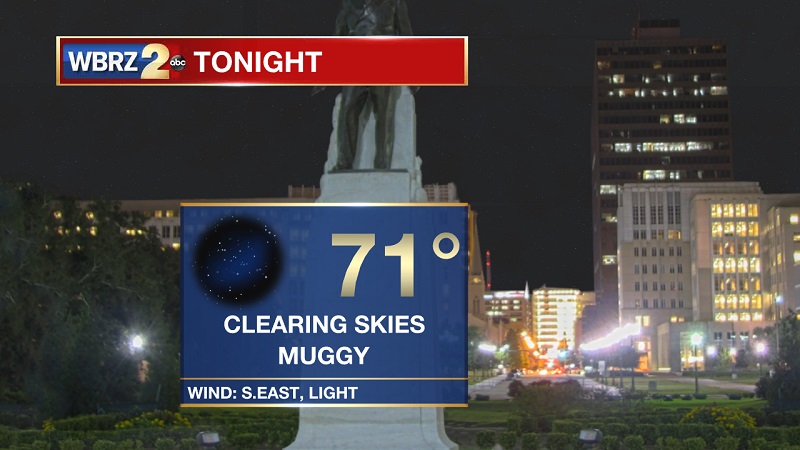 Up Next:  The cold front will dissipate and linger through Tuesday and early Wednesday before another front from the northwest helps to supply enough energy to push it into the Gulf. Drier conditions Wednesday and Thursday, with cooler highs in the mid-70s. This will not last long, as another batch of showers and storms are set to move in for the weekend.

There are no named storms in the Atlantic, but we are currently tracking two separate tropical waves that could gain tropical characteristics in the coming days. The first is a broad, low-latitude tropical wave located more than 800 miles east of French Guiana and is producing a large area of cloudiness and disorganized shower activity. Any development of this system should be slow to occur during the next couple of days before upper-level winds become unfavorable around mid-week, prior to the disturbance reaching the northeastern coast of South America. This wave is expected to move westward at about 15 mph during the next few days. The National Hurricane Center is forecasting a 10% chance of tropical development within the next 5 days.

The second is an area of disturbed weather that has developed over the southwestern Caribbean Sea in association with a large low pressure system located more than 200 miles east-southeast of the Nicaragua-Honduras border. Upper-air data indicate that the system has become better defined over the past couple of days. However, the surface circulation remains broad and upper-level winds are expected to be only marginally favorable for any development to occur while the system moves westward to west-northwestward over the next couple of days, reaching Nicaragua and Honduras by late Monday or early Tuesday. Regardless of development, locally heavy rainfall will be possible across portions of Central America Tuesday through Thursday. The National Hurricane Center is forecasting a 10% chance of tropical development within the next 2 days, but that increases to a 20% chance within the next 5 days. 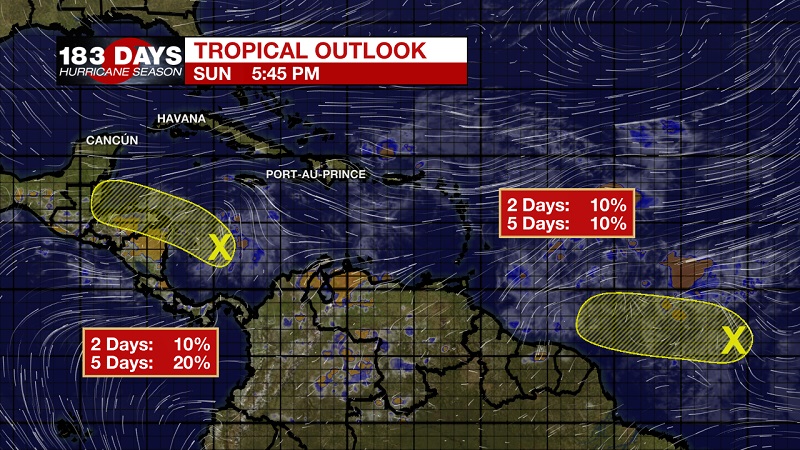 An approaching cold front has allowed for southerly winds to bring elevated temperatures and dew points across the region to wrap up the weekend. This will stay the course as we proceed into Monday, but the broken cold front will get much closer to provide more efficiency in bringing Gulf moisture onshore. This will allow for scattered showers and storms to develop as temperatures break into the 80s through the late morning and afternoon hours. These showers will linger as the broken cold front stalls across the Gulf States. A second frontal system will strengthen the original front Tuesday into early Wednesday, which will help to push the front through and into the Gulf of Mexico. Cooler conditions will be felt on Tuesday, with drier conditions Wednesday and into Thursday. We can expect fall’s “parade of cold fronts” to continue as we approach the weekend. Showers slowly increasing on Friday, as a much stronger cold front moves in from the northwest on Saturday. Models are suggesting a tropical low developing along the Texas Coast, which may get pulled across Louisiana on Saturday. This wave of heightening storm activity should pass from Lake Charles to Alexandria, but this could waver as models get more defined through the week. Regardless, this front will have plenty of strength, as high pressure travels in behind the front on Sunday. Temperatures should stay relatively average to slightly below average through the upcoming week, with only Monday and Friday being the outlier and staying slightly above 82°