Monday PM Forecast: showers and storms to increase this week

A busy week is ahead. There will be some rounds of unsettled weather—especially Wednesday and Thursday. Meanwhile, a tropical disturbance in the northern Gulf of Mexico could enhance the rainfall if it can get organized over the next few days.

Next 24 Hours: Tonight will be mostly clear and muggy with low temperatures in the mid to upper 70s. Tuesday will be partly sunny with high temperatures racing into the low 90s by early afternoon. Isolated showers and thunderstorms will pop in response to the daytime warming, but many locations will still miss the rain.

Up Next: A weak area of low pressure will meander near the southeast Louisiana coast through the end of the week. This feature has a low chance of tropical development, but whatever becomes of will not change the forecast for a few rounds of rain. Wednesday through Friday, scattered to widespread showers and thunderstorms will develop, especially with daytime heating. Any thunderstorms will be capable of dropping a lot of rain in a short time, which could lead to some street and poor drainage flooding. The rainfall forecast is for 1-2 inches north and west of Baton Rouge, about 2-4 inches in and around the city, and 5-7 inches south and east of Baton Rouge. Any shift in the position of the area of low pressure would alter the forecast and expected rain, so stay in touch. CLICK HERE for your detailed 7-Day Forecast. 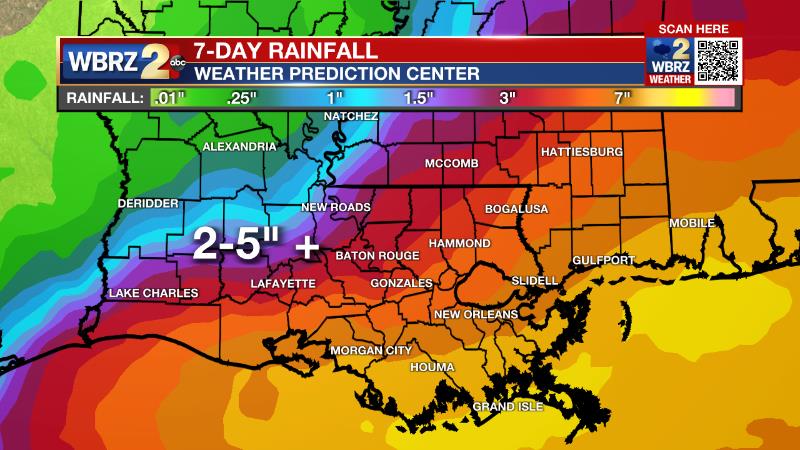 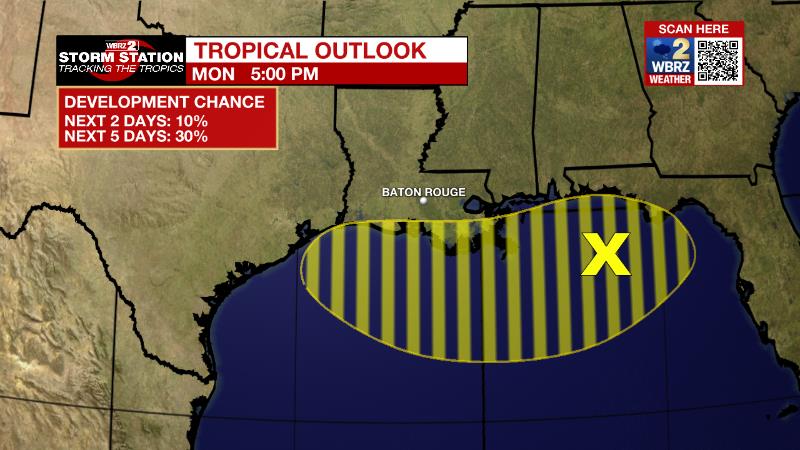 The Explanation: A weak trough of lower pressure draped across the Gulf Coast will bring an increasing threat for showers and thunderstorms through the week. There is a slim chance that the trough could take on some tropical characteristics, but either way, periods of heavy rain will remain the item to watch--especially south and east of Baton Rouge. On Tuesday, moisture in the atmosphere will increase and showers and thunderstorms will break out with the daytime warming closer to the lakes and coast. By the middle of the week, the surface trough will have its best go at becoming a tropical low or depression. However, at this time, no models are too bullish with development and this makes sense with a large region of dry air draped across the middle of the country and pushing south in a northwest to southeast flow. Additionally, this dry air complicates the forecast somewhat in creating a sharp cutoff between a dry and moist atmosphere over the local area. For this reason, much more rainfall is expected south and east of Baton Rouge Wednesday through Friday, in closer proximity to the trough and more abundant moisture. Total rainfall through the weekend will range from 2 inches north and west of Baton Rouge to about 7 inches south and east. As always, any spots that experience storm downpours in succession could see some localized much higher amounts leading to street and poor drainage flooding. The forecast is a little less clear for the weekend and beyond as we await the evolution of the trough and if it kicks away to the east trending the area drier or stays put trending the area wetter.