After one more sunny and seasonable day, clouds will increase as the week ends. On Saturday, a steady period of rain is expected to occur across the central Gulf Coast.

Today and Tonight: Thursday will be a repeat of the pleasant weather so far for much of this week. With plenty of sunshine, highs will make it into the low 60s with light, northeast winds. Nighttime lows will fall into the low 40s with some cloud cover developing.

Up Next: An increase in clouds is expected with an isolated shower possible on Friday, especially in the afternoon and evening. Showers will continue to increase in coverage on Saturday, which is shaping up to be wet. More than an inch of rain is possible depending on the track of the parent storm system. Even if the total rainfall is lighter, the cloudy and soggy weather may force any outdoor plans to move inside.  Hopefully, the current forecast holds in clearing skies out in time for the first Baton Rouge area Mardi Gras parade—the Mystic Krewe of Mutts!

Paws crossed for @CAAWSBR that rain clears out in time for #BatonRouge area pooches to start #MardiGras parades in the city. pic.twitter.com/7EAL1cgAv4

Seasonable temperatures will follow that system from Sunday into the middle of next week. The forecast models are hinting at another deep trough and associated cold air sinking into the eastern half of the country by the end of next week. However, it is far too early to tell how cold temperatures will go or if, and when, there could be any precipitation. 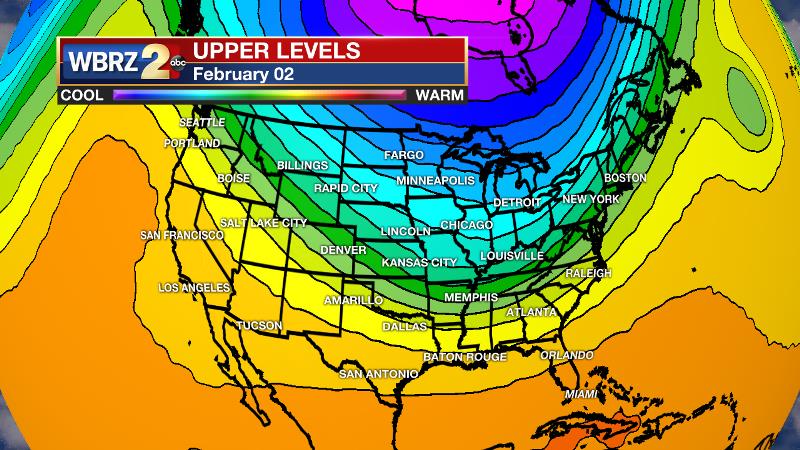 Clouds will begin to increase on Friday thanks to the development of deep southwest flow and resulting moisture return interacting with an area of positive vorticity advection in the mid-levels. A shower is possible. Then, an area of low pressure is expected to develop in the western Gulf of Mexico and possibly merge with a front. Depending on the track of this system, we will need to monitor the possibility of an area of heavy rain and maybe even some strong thunderstorms as well. As of now, the ECMWF model takes a more northerly track resulting in wetter and stormier weather. In this scenario, more than an inch of rain would be possible in many locations. The GFS model takes a track south of Louisiana and through the Gulf of Mexico, which would mean much less rain and virtually no thunderstorms. Both models suggest saturated mid-levels though which result in overcast skies and at least some rain. As noted by the National Weather Service, until the energy that will spawn this system moves out of the Pacific Ocean and into the upper air network of the western U.S., details of this system will remain sketchy. We should have a better handle on it by Thursday afternoon. Like Monday’s, the Canadian connection does not seem to be there with the weekend cold front either, so it does not seem that a serious cold spell looms behind this one. However, we can still expect some lows in the 30s and potentially near freezing temperatures. Looking way ahead, much of next week looks quiet, however forecast models are indicating another front with a fast cool down and precipitation for the end of next week. Oh boy, stay tuned.