Lingering showers prior to a pleasant weekend

Behind a cold front, rain is expected to linger through the end of the week. A cooler, clear weekend is ahead. Our team discussed the “conditional” chance of severe weather on Thursday and due to the lack of instability, indeed, storms did not materialize. However, heavy rain did fall as forecast, primarily north and west of Baton Rouge. Some location collected more than 4 inches while the Capital City received just shy of 2 inches—most of which fell prior to sunrise and after sunset. 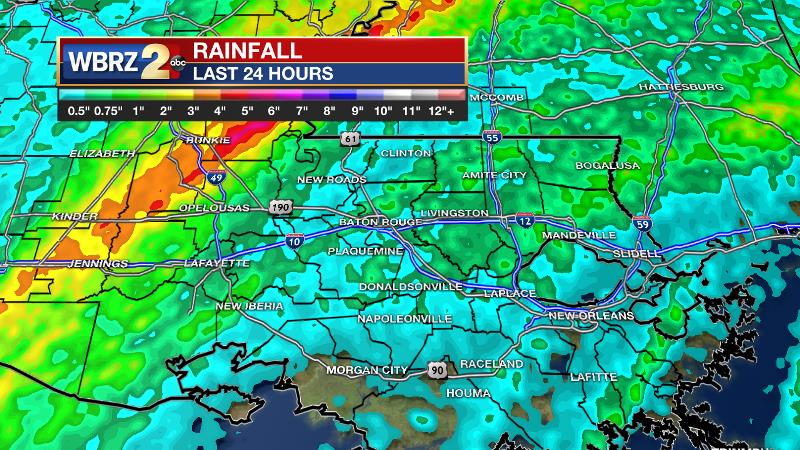 Today and Tonight: With continued cloud cover, rain will be slow to break from west to east on Friday. Temperatures will be steady in the mid 60s. Scattered showers may be in play for much of the day as the initial cold front moves east. Beyond this, satellite trends and high-resolution forecast models suggest some sun could sneak through during the afternoon hours. However, a secondary cold front will push through this evening with an isolated shower or two possible. Overnight, more appreciable clearing will occur. Thermometers will cool into the mid  40s as winds shift northwest at 5-10mph.

Up Next: A tranquil weekend of weather is ahead. Expect both afternoons to bring sunshine with highs in the upper 50s and low 60s. Sunday morning will be the coolest time period, with lows in the upper 30s. Some light rain showers could pass the area Monday night into Tuesday morning, but this does not look to be anything significant.

Bands of rain continue to stream northeastward across the region, primarily affecting those locations north and west of Baton Rouge that have already incurred a healthy soak. This activity is behind the cold front that passed on Friday evening and ahead of the secondary front situated across western Louisiana. This pocket of rain could deliver another inch or so, but no major issues are anticipated. Just prior to the secondary boundary, some clearing is noted on the satellite picture, likely associated with the upper level dry slot into the parent cyclone over the Mid-Mississippi River Valley. Therefore, while some sun could sneak out this afternoon, one last gasp of spotty showers is possible. After the front passes, temperatures and dew points will drop as winds shift northwesterly. Fog could develop tonight as the cold front passes but substantial clearing is anticipated early Saturday. Tranquil weather is expected for the weekend before another upper level trough drives a weaker cold front through the region on Tuesday. This system will not have an environment supportive for severe weather or heavy rain and only a few showers are expected.