Geaux Tigers on this weather forecast

Woohoo! Alas, seasonable temperatures and sunny skies have arrived just in time for the first weekend of March. An isolated shower could return as early as Sunday afternoon.

Today and Tonight: Picturesque would be a good word to describe Friday’s weather. With sunny skies, temperatures will nudge up to a near normal high of 72 degrees with light, north winds. Overnight, clear and cool conditions will continue with thermometers dipping into the mid 40s.

LSU Baseball kicks off another three game weekend against Toledo this evening. Take a jacket to the game, as temperatures will fall out of the low 60s and into the 50s. A similar forecast is expected for game two against Sacred Heart on Saturday evening. Sunday afternoon will bring clouds and possibly some sun with temperatures around 70 degrees for the revenge game against Southeastern.

Up Next: Saturday afternoon highs will be close to normal in the low 70s with continued sun. Another night in the 40s will lead into Sunday. By the second half of the weekend, clouds will begin to return with a shower even possible by dusk. The best chance for rain in the 7-Day forecast will come on Monday night and Tuesday morning as a cold front moves into the region. At this time, it looks like the front will push out on Tuesday followed by a period of, get this, sunshine and below average temperatures for the end of next week! 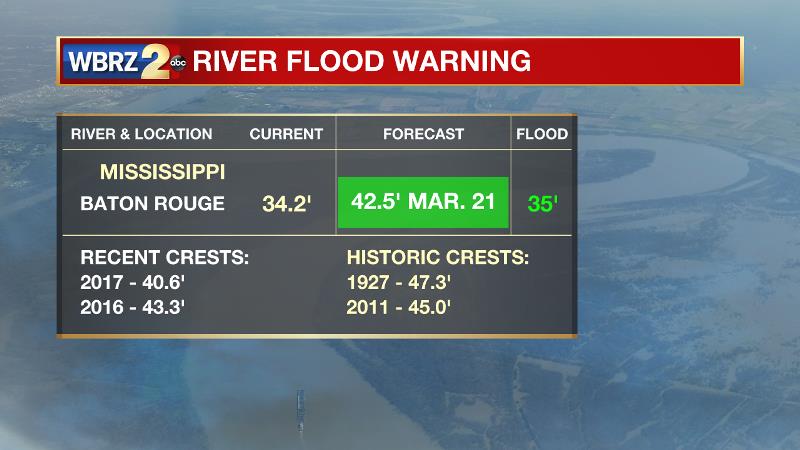 As is common in the spring months, the Mississippi River will slowly rise over the next few weeks. For the local area, from Red River Landing to Baton Rouge to Donaldsonville, the crest will occur around Mid-March. Given the current forecast, impact outside of the levees is expected to be minimal with the exception of soppy land around the Angola farms and by the LSU veterinary complex. The city of Baton Rouge is protected by levees up to at least 43 feet. On the river, traffic and industrial operations will be restricted.

With a cold front through the area, northerly winds have taken hold and the area is feeling cooler temperatures, lower dew points, and therefore lower humidity. Due to a broad surface high pressure centered in the Eastern U.S., two days of sunshine and seasonably cool temperatures are expected. Overnight lows could dip all the way into the mid 40s, marking the coolest temperatures since mid-February. Another ridge will briefly build over the area on Saturday afternoon continuing to suppress most cloud and shower development. A warm front will lift through the area over the second half of the weekend, and this could spark a shower.  Yet again, a cold front will follow on Monday with scattered showers and possibly thunderstorms. At this time, rain amounts look manageable. With a deep trough building into the eastern half of the country, signs point to below average temperatures for the middle and end of next week. Right now, models suggest highs in the mid 60s and lows in the low 40s.