If you do not have outdoor plans Saturday or Sunday, make some! Sunny and seasonable conditions are expected for the final weekend of March.

Next 24 Hours: Overnight will be clear and cool with low temperatures in the mid 40s. Expect calm winds. Moving into Saturday, more of the same is ahead with sunshine driving high temperatures right back into the mid 70s. Winds will be light and westerly.

Up Next: Sunday will be our last morning in the upper 40s, and so the last morning where you may want a light jacket for a little while. Skies will stay mainly clear all with high temperatures climbing into the upper 70s Sunday afternoon. Expect those numbers to be back into the 80s on Monday and Tuesday. A few clouds will start to appear early in the week as winds shift south and some moisture comes in from the Gulf of Mexico. The next frontal system will arrive around Wednesday afternoon with rain and thunderstorms likely. Already, it looks like this system will have the potential to produce some strong thunderstorms in the Gulf Coast states. We will keep you updated. CLICK HERE for your detailed 7-Day Forecast.

The Explanation: An upper level trough of low pressure will move away from the local area toward the Eastern U.S. through the weekend. This will keep upper level winds northwesterly in the local area, promoting a very dry atmosphere. Clouds will be tough to find. Mainly clear skies, dry air and light winds will cause a large diurnal temperature range with cool mornings and warmer afternoons. In addition, that dry air will keep daytime relative humidity between 20-40 percent, which is quite low for the Gulf Coast. On Sunday, a weak upper level ridge of high pressure will move overhead, sending high temperatures into the upper 70s. Winds will begin to take on a southerly direction on Monday; low temperatures will break back into the 50s and that is near average for the time of year. Monday and Tuesday afternoon will reach the 80s with the gradual moisture return resulting in some low cumulus development. 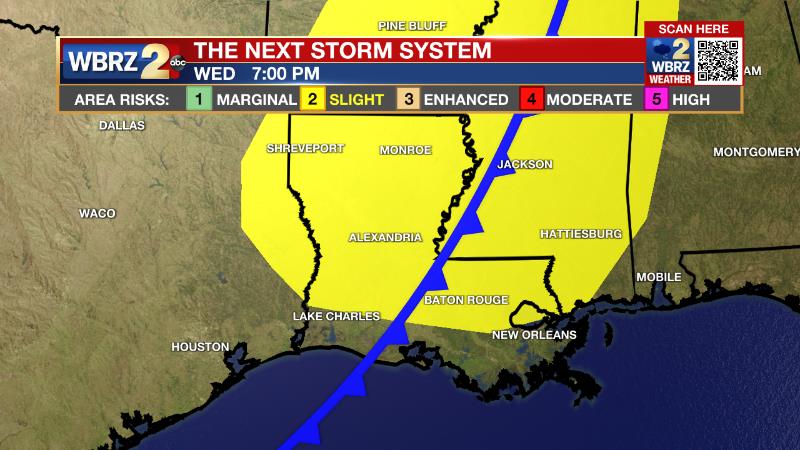 By the middle of next week, a deep trough of low pressure will dig into the Lower Midwest and aim its associated frontal system at the local area. This system is very likely to deliver rain and thunderstorms to the area, but it is a little early to assess the strength of the system overall and therefore if storms could be strong or severe. Both the American and European model show early indications of a sharp trough, strong upper level winds and instability, but wind shear could be a bit lacking this far south. It is way too early to dig deeper, but it is the spring season, and frequent threats for severe weather should be expected.