BATON ROUGE – A normal routine drive to work Monday morning nearly cost Nicole Parham’s life. She was driving on Tiger Bend road near Antioch when she noticed the car going the opposite direction, towards her, was texting.

“She had both her hands on her cell phone and her arms on the steering wheel,” said Nicole.

Nicole still doesn't know who that driver is, but she can recall step-by-step how she caused her to drive head on into a box truck.

"I was definitely feeling that moment of, I'm not going to live,” said Nicole. 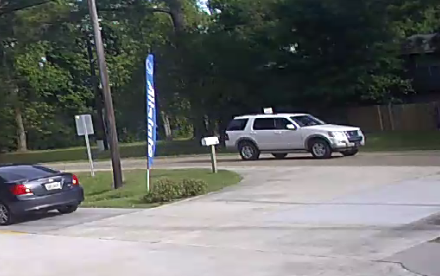 Nicole says the blonde female driver was in a white Ford Explorer. She swerved into Nicole’s lane, clipping her and causing Nicole to hit the truck. Then that driver fled the scene.

“I don't know how someone could cause an accident like that and then just, leave,” said Nicole.

Nick got the call about the car crash at work.

“A deputy called and said I'm at the scene of the accident with your wife, and my first thought was well, why isn't she calling?”

Nicole was briefly unconscious. Her car smashed in on the driver side. She suffered cracked ribs, a seat belt burn and multiple cuts and bruises. But, she survived.

“I can't express how grateful I was to just feel pain in the first place,” said Nicole.

Days later, the couple is now focusing on who was driving the white Ford Explorer. They want her off the road.

“I just can't accept that someone would continue to be out there like that,” said Nick.

An Allstate Agency nearby caught the SUV driving minutes before the crash. The pair is hoping someone will recognize it and call the East Baton Rouge Sheriff’s Office.

A GoFundMe account has been set up for the Parhams.