Except for Thursday, a few fast moving cold fronts will maintain below average temperatures through the weekend. A better chance for rain may develop next week.

The Next 24 Hours: Finally, we have a straightforward overnight forecast where clouds, winds and snowpack are not major factors. Beneath clear skies and with light, southwest winds, low temperatures will dip into the mid to upper 30s. On Thursday, continued southwest winds of 10mph and abundant sunshine will combine to provide the warmest readings of the week with highs in the mid to upper 60s. Some high clouds could enter the area late.

After That: Another cold front will sweep through on Friday morning. This one should pass by mainly dry but a stray shower is not impossible. Since winds will shift back to the northwest, afternoon highs will return to the 50s. Both weekend mornings could be frosty, in the low to mid 30s followed by mostly sunny skies and highs in the upper 50s. Beyond a weak front on Sunday night, signs point to some wetter days toward the middle of next week. Wednesday appears to bring the next reasonable chance for rain. CLICK HERE to view your complete 7-Day Forecast.

The Explanation: A surface high will build into the region on Thursday allowing sun and seasonable temperatures. The next cold front will approach on Friday with a minimal chance for showers. Due to a deep upper level trough, behind this boundary, lows will again flirt with freezing both weekend mornings. Another weak upper level trough and associated cold front will move into the Southeast on Sunday night. The basin of this trough, and therefore the coldest air, will remain north of the local area. A slower moving upper level low may move over the Texas coastal plain by the middle of next week. With a surface high east of the area, deep southeast to southwest flow will allow moisture to increase at all levels of the atmosphere and clouds will be on the build Tuesday. Some showers could begin as early as Tuesday night. 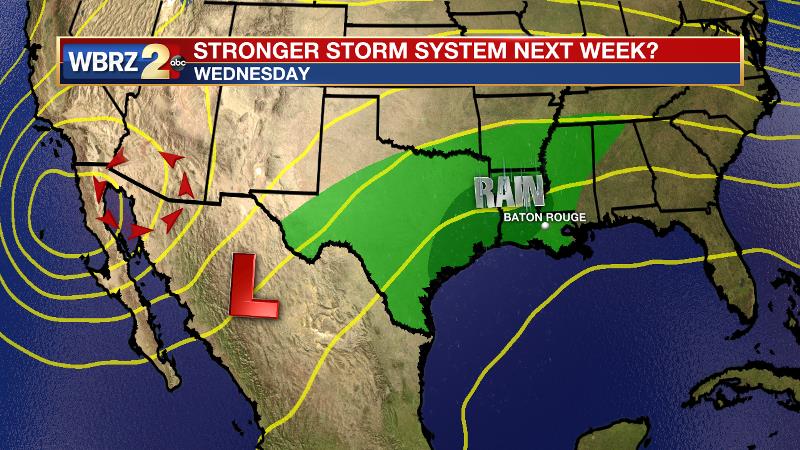 Forecast models currently disagree as to the speed of the upper level trough and therefore the duration of rainfall around the region. The GFS suggests a more prolonged period of clouds and showers Tuesday night through Thursday while the ECMWF shows more of a 24-hour event.