A typical summer pattern will persist through the weekend, complete with heat indices and pop-up storms. 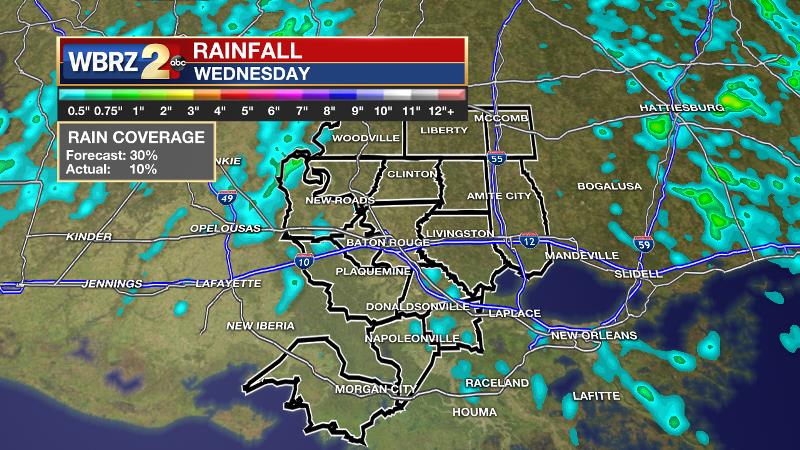 Wednesday marked the first day this week where rain coverage was a bit off from the forecast. Approximately 10 percent of the WBRZ Weather forecast area picked up measurable rain while 30 percent coverage was expected. Timing was correct however, with action taking a longer time into the afternoon to initiate.

Backwater flooding continues in Assumption Parish, especially in Pierre Part and areas near Belle River. As long as the Atchafalaya River remains above flood stage, drainage will no slow to nil. The latest forecasts suggest water levels will be elevated through the weekend. Alas, the river forecasts finally show the Atchafalaya dipping below flood stage by early next week which would allow the backwater flooding to begin to recede.

Up Next: Through the weekend, isolated showers and thunderstorms will be possible during the afternoons but rain coverage will low—on the order of 20-30 percent. As a result of fewer clouds and showers, high temperatures will climb into the low 90s. Lots of humidity will produce “feels like” temperatures near 100 degrees, so especially for outdoor events this weekend, stay hydrated. Nights will be partly cloudy and muggy with lows in the mid 70s. By early next week, a cold front and some tropical moisture may again increase the chances for showers and thunderstorms. 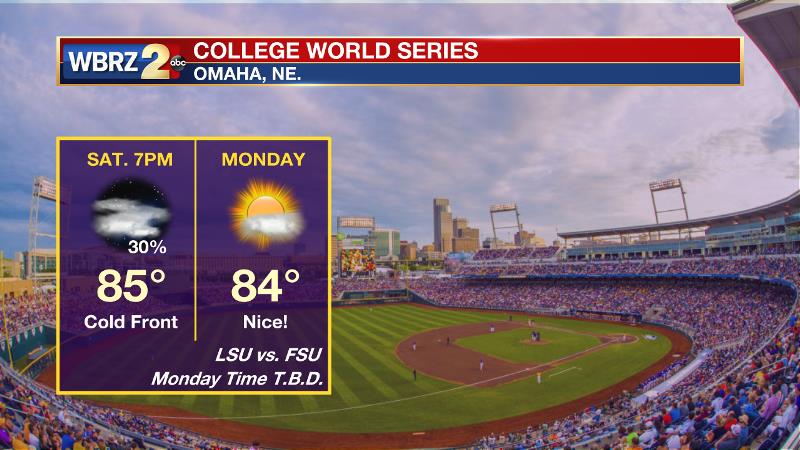 The LSU Tigers will take on the Florida State Seminoles at 7pm Saturday for their first College World Series game. In Omaha, it now appears as though a cold front will be passing through the area during that time. Therefore it will be muggy, with a first pitch temperature in the mid 80s and scattered showers and thunderstorms will be a possibility. Because of that front though, the second game will be played in very nice weather on Monday, though the time is not yet known. 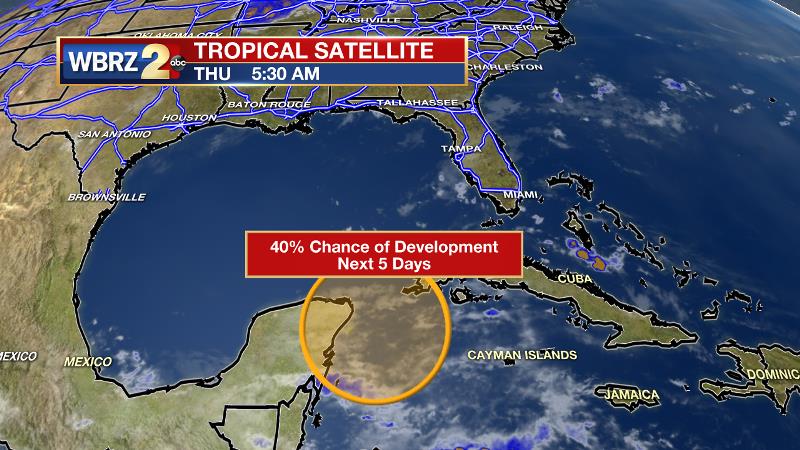 The Tropics: It continues to look as though a weak tropical wave will develop near the Yucatan Peninsula and move slowly northwestward into the Bay of Campeche by early next week. The National Hurricane Center pegs a 40 percent chance of further organization over the next five days. Due to an increased pressure gradient from this system, tides along the Louisiana Coast may run a little higher. In addition, depending on the path of this potential storm across the Southern Gulf, the local area may notice an increase in showers and thunderstorms next week. Rather unusual for this early in the season, there is also a cluster of showers and thunderstorms in the far eastern Atlantic which is also given a 20 percent chance of development into next week.

THE SCIENCE: An upper level trough will dig into the Southeastern United States through Saturday. Normally, height falls would represent increasing instability but a ridge to the west will keep upper level temperatures a bit warmer and northwesterly flow will result in near to slightly below normal moisture content. As a result, convective temperatures are going to be in the upper 80s and the sea breeze will have a more difficult time kicking out showers and thunderstorms. Rain chances will not be eliminated but reduced into the isolated category through Monday. As a result, more sunshine is expected each afternoon which will push high temperatures into the low 90s. With continued dew point readings above 70 degrees, heat indices will be in the mid to upper 90s. By Tuesday a cold front interacting with some tropical moisture from a potential system in the Southern Gulf of Mexico may again increase the coverage of showers and thunderstorms.