Highs will be warm but likely just below records on Thursday and Friday. The next cold front will deliver widespread showers and thunderstorms on Saturday.

Next 24 Hours: Southeast winds of 5-10mph should be elevated enough to prevent widespread fog formation overnight. Skies will otherwise be mostly cloudy with low temperatures in the mid 60s. The new status quo warm December pattern will continue on Thursday as high temperatures approach 80 degrees. Skies will be partly sunny and a stray shower is possible in the afternoon.

Up Next: A bout of fog is possible Friday morning before another warmup into the low 80s. Over the weekend, the next frontal system will slowly drop into the area from the northwest. The front will bring showers and thunderstorms into the forecast for Saturday. The front is expected to sag into the Gulf of Mexico on Sunday but some clouds will linger north of it. Much cooler air will push in and keep high temperatures in the upper 50s and low 60s on Sunday and Monday. The low temperatures will be in the 40s through early next week. A weak disturbance will cause a passing batch of light rain Monday afternoon and evening. CLICK HERE for your detailed 7-Day Forecast.

The Explanation:  A frontal system will stall in the Lower Midwest on Thursday before chugging southeast toward the local area on Saturday. Prior to this, onshore flow will maintain dew point temperatures in the mid 60s and air temperatures about 15 degrees above average for the time of year. Winds are likely to be strong in the 5-10mph range for fog to develop on Thursday morning but will be lighter and therefore allow fog formation on Friday morning. Afternoons will continue to have a mix of sun and clouds with high temperatures pushing 80 degrees. A stray shower is possible either afternoon to end the week as low level moisture increases beyond just the surface. 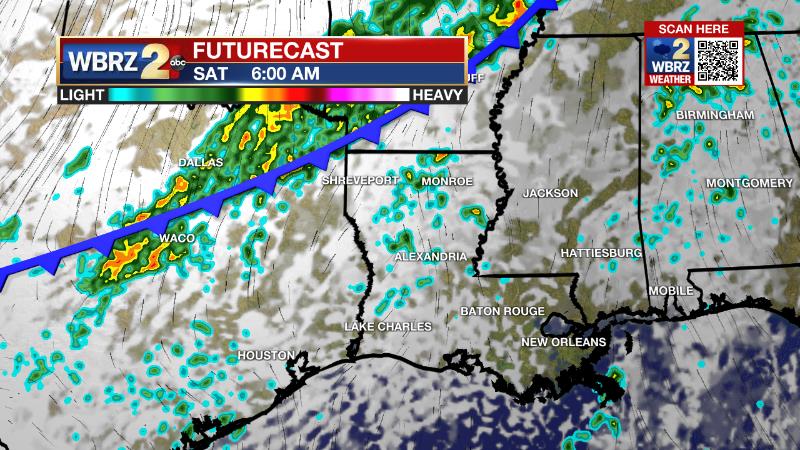 A weakening upper level trough will move east through the region on Saturday, pushing that stalled cold front into the local area. The upper level winds are expected to be parallel to the front, which will cause it to have a slow push through our area. Any favorable upper level winds for severe weather should race well east of us before the front arrives and instability is too weak for substantial thunderstorms as well. A broken line of showers and thunderstorms should traverse the area from late morning through early evening. The front should be clear of the area and stalled in the northern Gulf of Mexico by Saturday night. Lingering shower activity could persist through the overnight hours, but some drying is expected on Sunday as a weak surface high builds in from the north. Temperatures will cool dramatically behind the front with readings falling into the 40s and lower 50s Saturday night before only warming upper 50s and lower 60s on Sunday. These cooler temperatures will be supported by lingering cloud cover associated with weak lift occurring over the remnant boundary in the northern Gulf of Mexico. On Monday, a sharp upper level wave of low pressure will buzz across the southern third of the country. A surface low is likely to develop due to this feature and move from west to east across the northern Gulf of Mexico. That position will keep the area on the cool side of this system and result in a patch of rain Monday into Monday night. Quieter weather and near average temperatures are expected Tuesday and Wednesday.