Near record high temperatures area expected to end the week. Even though there is no immediate threat to the local area, we all need to continue to watch a tropical wave entering the Caribbean Sea.

Up Next: Friday and Saturday, temperatures will remain warmer than average with highs in the low to mid 90s. A more substantial cold front will come into the area on Sunday afternoon, perhaps sparking a few showers and thunderstorms until it passes offshore on Monday morning. Once the front is through, drier and more seasonable air is expected with highs in the mid 80s and lows in the low 60s for much of next week. The front may also play a role in steering a tropical system that ends up in the southern Gulf of Mexico next week (more below). CLICK HERE for your detailed 7-Day Forecast.

The Tropics: A tropical wave is producing shower and thunderstorm activity near the southern Windward Islands and over adjacent waters. The system continues to show signs of organization, and there is a ninety percent chance it will become a tropical depression within the next couple of days. The disturbance is forecast to move west-northwestward across the central Caribbean Sea later this week. 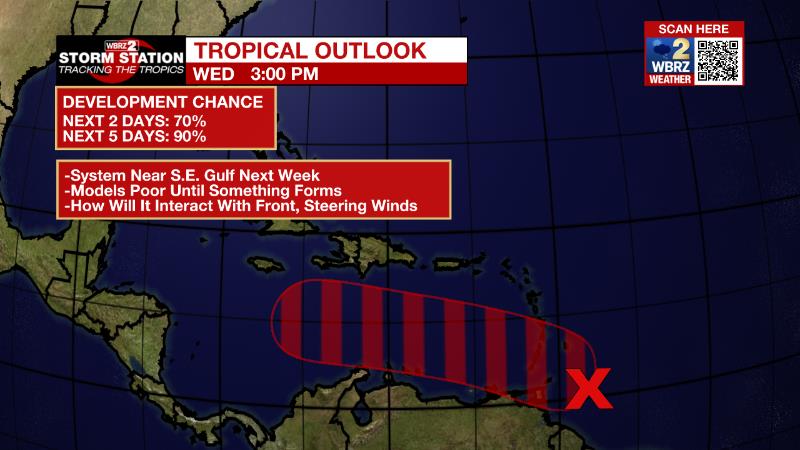 This system will enter a very favorable environment for strengthening atop very warm water and below low wind shear. A lot of guidance, that stretches beyond the scope of what would be considered reliable, does place a tropical system near the southeastern Gulf of Mexico around the middle of next week. Keep in mind that until a system has formed a closed circulation and become a depression, forecast models do no not perform well. We are still very much in the middle of hurricane season and should continue to monitor this system and remain prepared. 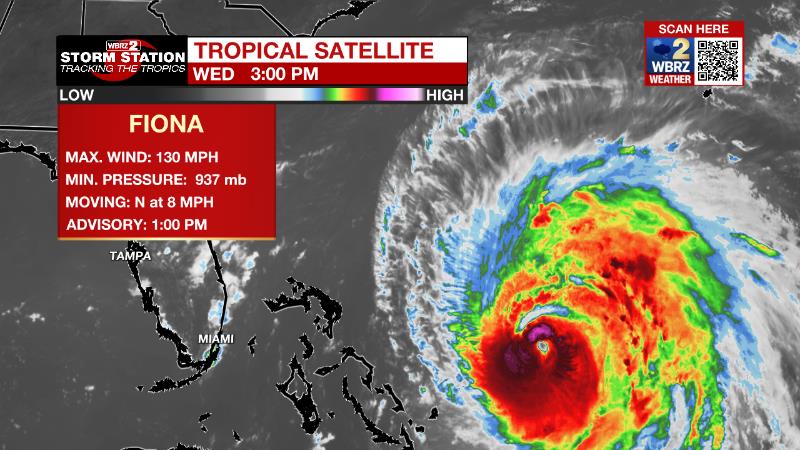 The most intense storm so far this season, Hurricane Fiona, continues northward across the western Atlantic Ocean at 8mph. With maximum sustained winds of 130mph, the category four storm may strengthen further over the next day or so while accelerating to the northeast. Though it is expected to stay just west of Bermuda, hurricane conditions are possible. By the end of the week, Fiona will transition into a powerful non-tropical system in the north Atlantic.

Tropical Storm Gaston is maintaining maximum winds of 65mph over the northeastern Atlantic Ocean. The storm will continue moving northeast at 16mph before turning east, stalling and weakening near The Azores later this week.

Two other tropical waves in the far eastern Atlantic Ocean are being flagged for development by the National Hurricane Center. Neither poses a long-term threat to the United States.

The Explanation: An upper level ridge of high pressure will remain centered over the Lower Midwest and maintain dry, hot conditions through the rest of the workweek. As the steady climb on afternoon temperatures has continued through the week and should maximize with the closest proximity to the ridge on Thursday, record high temperatures are forecast at Metro Airport (95 degrees 1997). The upper ridge will pinch west a bit on Friday and Saturday but still exert plenty of influence over the local area to keep high temperatures about 5-7 degrees above average in the mid 90s. An upper level trough of low pressure will begin to cut across the Great Lakes region on Sunday. This feature will squeeze the ridge further west and away from the area will allowing a cold front to push south toward the Gulf Coast. The approaching front will bring a pocket of low level moisture offering the best chance for isolated showers and thunderstorms of the entire forecast period late Sunday into Monday. The weather will be in transition as the new week begins. As the cold front moves offshore, dew point temperatures will fall signaling a drier and slightly cooler air mass. By Tuesday morning, low temperatures will be closer to average in the mid 60s followed by high temperatures in the mid to upper 80s. These seasonable readings will continue through the middle of the week. 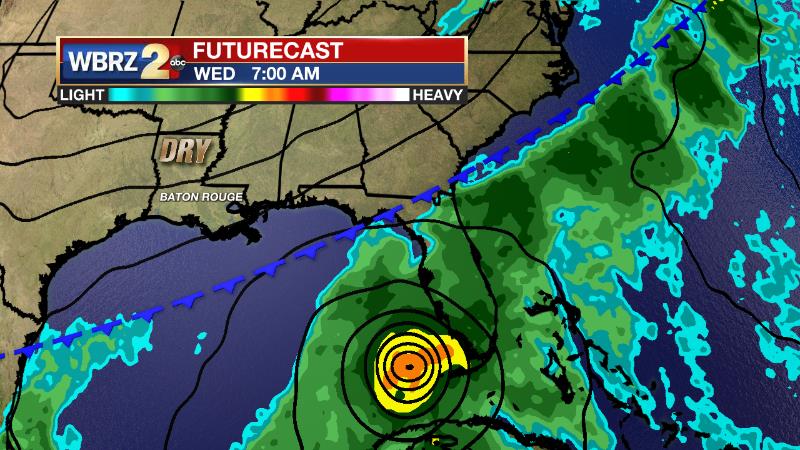 While beyond the scope of reliable forecast information, a tropical system of some organization is expected to enter the southeast Gulf of Mexico next week. At this time, it appears the cold front and subsequent drier air mass would help to keep that system from the local area. However, it is too early to make that call definitively.